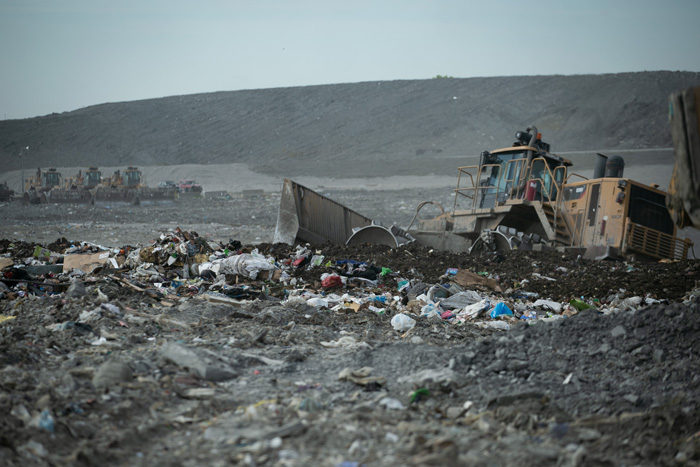 Garbage trucks come by once a week to pick up trash at homes and businesses across Johnson County, and residents don’t even think about it. But where that trash ends

Garbage trucks come by once a week to pick up trash at homes and businesses across Johnson County, and residents don’t even think about it. But where that trash ends up — the Johnson County landfill— is unclear to many.

Located on a sprawling site of 440 acres along I-435 between Holliday and Johnson drives, the landfill has been in operation for decades, mostly under management of Deffenbaugh Industries. Waste Management took over landfill operations in 2014-15. The Shawnee Planning Commission recently approved extending Waste Management’s permit to operate.

“I like to show the site to people because I’m proud of what we do here and it takes away some of the mystery,” said Mike Hey, senior district manager at Waste Management, which operates the landfill. “There’s a lot of misconceptions of what we do.”

They previously served Mission for about 15 years, but were replaced by the Houston-based WCA in 2019.

Tackling odor and preparing a new disposal site on the landfill, in addition to processing the trash brought in by 400 to 500 trucks each day are top priorities.

Hey said the COVID-19 pandemic did not create too much of a challenge. As an essential business, the landfill remained open. Employees simply keep to their own vehicles and don’t often rotate through pieces of equipment. When they do, they complete cleaning regimens to disinfect the machines.

The nearly full active disposal site by the eastern perimeter of the landfill, coupled with hot weather spells and westerly winds, has been determined as the cause for odor complaints, mostly from Lake Quivira residents. Plus, people may be outdoors more often in the summertime, so they may notice the smells more, Hey added.

The number of odor complaints have dropped in recent years, Waste Management and Shawnee city staff reported last month, in part because crews relocated the yard waste processing site to the southern portion of the landfill — away from neighboring residential areas. Hey said yard waste can be the largest source of odors.

Waste Management partnered with Shawnee on a new odor complaint hotline for residents to call. This has allowed the company to promptly address odors when they arise. That said, Waste Management and Shawnee city staff have both stated that wastewater treatment at a nearby plant could also be contributing to the odor.

Odorous yard waste, mostly grass clippings, is ground up in a machine called a tub grinder and mixed with other less odorous yard waste such as wood and leaves, which provide natural carbon sources.

Half a dozen deodorizing sprayers strategically placed throughout the entire landfill infuse a neutralizing waft that pretty much smells like nothing.

Waste Management also utilizes a high BTU gas plant to prevent odors from building up on the landfill. The technology collects and converts the odorous gases of the landfill — 55% methane and 45% carbon dioxide — into a higher BTU gas with higher methane content. Some of that methane fuels the dump trucks, while the rest of it is sold.

Diesel trucks with Waste Management refuel on site, but two-thirds of the company’s fleet now runs on natural gas. Trash comes to the site and decomposes, and pipeline technology on site converts waste from the landfill into usable, renewable natural gas to fuel the trucks.

“It’s a good feeling to know that you’re taking what is a nuisance gas, collecting it and making a valuable resource out of it,” Hey said. “It’s something that we can actually use in our own business and benefits us.”

The Johnson County landfill is in a unique position this summer. The active disposal site is nearing capacity. Hey said he expects it should fill up by October, at which point Waste Management will move into a new active disposal site on the western side of the property.

Engineers are using 30-foot-wide sheets of plastic (thick versions of the material used for Hefty bags) and a felt fabric material to line the bottom and sides of the giant rock quarry in preparation for the first layers of trash. The plastic layers are fused together using extreme heat, a process that creates a watertight seal to protect the ground beneath the landfill.

Once the new disposal site is active, Waste Management will cover the previously active disposal site (the one nearing capacity this summer) with a synthetic, plastic barrier — similar to the material lining the bottom and sides of the landfill — and then add several feet of soil, allowing vegetation to grow on top.

The Johnson County landfill closes in 2043. Hey said Waste Management will begin planning for a new site years before it closes.

How the active disposal site operates

Garbage trucks enter the site from Holliday Drive. A weighing station is posted at the entrance; adjacent is a free recycling site for the public. Upon arrival, trucks are checked in and weighed. They are weighed again on the way out, and Waste Management charges them for the difference between the two weights. Waste Management charges by the ton.

From first glance, the active disposal site looks like chaos.

Dozens of large equipment move on and off and around the site: Dumping trash, tipping giant boxes of trash, bulldozing, breaking down and flattening trash, mixing in shale with the layers of trash, hauling cover soil made of shale to dump on the layers of trash. Trash layers are covered daily with 6 inches of clean soil made from shale. On dusty days, equipment trucks also spray the active disposal site and dirt roads with water.

About 400 to 500 trucks haul trash in each day, and about 40 or 50 machines perform those various functions.

“It can get really busy really fast,” Hey said. “If you were to come to this site not knowing your way around and had a pickup truck of waste, I wouldn’t want you driving around here because you could run the risk of getting run over. That’s not a forgiving machine if it were to run you over. Plus, I want these guys moving — it’s all production. These machines are big and expensive.”

How expensive? Compacting machines — the arguably most important equipment on site — could cost up to $1 million.

Down the hill from the active disposal site, Waste Management crews walk the area to pick up litter that has blown away. Large retention basins strategically collect runoff from the rain, allowing trash and contaminated silt to pool in one area instead of draining off the premises into public waterways. Fences around the site keep loose trash from blowing off site.

“If you don’t see the landfill from the inside, the only view you have is what’s shown in movies and on television, and they always paint the picture of a landfill is a horrible place with garbage piled up all over the place, and it’s really not the case,” Hey said. “A lot going into building these things. There’s a lot of technology. Even the active filling operation, there’s a science that goes into that.”

For other resources on the Johnson County landfill, check out the following: