A bill on Medicaid expansion is heading toward a final action vote on the House floor today with the support of all but one member of the Shawnee Mission area delegation.

The successful introduction of the language on the House floor Wednesday appears to greatly improve the chances of getting a Medicaid expansion bill to the desk of Gov. Laura Kelly, who has identified the initiative as one of her top legislative priorities.

Among the 70 “Yea” votes to advance the bill Wednesday were:

Rep. Charlotte Esau (R-Olathe), whose 14th district includes a small portion of territory in the southwest corner of the Shawnee Mission School District footprint, voted against the bill.

The federal government covers 90 percent of the costs of coverage to those eligible for Medicaid care under expansion bills. But enacting the bill would increase costs for state government. The Kansas Health Institute conducted a study that found Medicaid expansion would provide coverage to 130,000 low-income Kansans and would add $47.4 million in costs to the state budget.

Parker, who has been a vocal proponent of Medicaid expansion since coming to the House in 2016, said the prospects for the bill making it to the House floor for a vote appeared murky even just days ago.

“My first takeaway is that it took tremendous action to get this to a vote, and all of that action was because the people of the state of Kansas want to see us expand Medicaid,” Parker said. “We had leadership trying to prevent this from coming up, but we had a bi-partisan group of legislators that wanted to take action on it.”

On Wednesday, Democratic Rep. Kathy Wolfe-Moore of Kansas City, Kan., used the “gut-and-go” maneuver to insert the Medicaid expansion language into a bill that had been introduced by House Majority Leader Dan Hawkins. Democrats have been critical of the “gut-and-go” procedure — in which the language of bill brought to the floor after going through the committee process is removed and replaced with new legislation — in recent years. But with Republican committee chairs preventing a Medicaid expansion bill from making its way through the standard legislative procedure, Democrats said they didn’t have another option.

The Senate could now take up the bill passed by the House — but it’s unlikely the bill will make it through the standard procedure because Senate leaders, including Sen. Majority Leader Jim Denning of Overland Park, have long opposed Medicaid expansion in the state. Parker said he believes it’s likely that the bill could be used as a bargaining chip in negotiations between legislative leaders and Kelly as the session draws to a close.

The Overland Park Chamber of Commerce has voiced its support for a federal bill co-sponsored by area U.S. Rep. Sharice Davids that’s intended to

Each legislative session, we provide the Shawnee Mission area’s elected officials with the chance to share their thoughts about what’s happening in the state 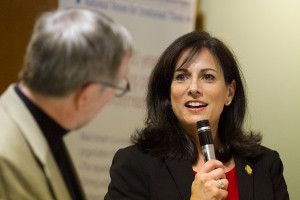 Gov. Laura Kelly on Tuesday released a bill that would expand Medicaid access in Kansas, a move her office says could provide as many

A bill to expand access to Medicaid in Kansas passed the House and Senate last year only to be vetoed by then-Gov. Sam Brownback.

Rep. Stephanie Clayton of Overland Park has become the second northeast Johnson County elected official to announce she is leaving the Republican party to

Sen. Barbara Bollier’s announcement that she was decamping from the GOP and had changed her party affiliation to Democrat had many Shawnee Mission area