Rising SM East senior Will Mohr picked a good time to catch fire on the lacrosse field. The midfielder netted a career-best six goals in the Lacrosse Association of Kansas

The midfielder netted a career-best six goals in the Lacrosse Association of Kansas City championship game on Saturday, leading the Lancer Lacrosse team to a 12-7 win over perennial foe Rockhurst and the team’s second straight LAKC title.

Rockhurst’s defense came out focused on shutting down the Lancers’ top scoring threats, Cade Eldred and Griffin Fries, said head coach Will Garrett, so it fell to some of the younger players to mount the scoring attack.

“What you saw was they were shutting off two of our best scorers,” Garrett said after the game, “and we needed some of our younger guys to step up, and they did. I’m really proud of them.”

Mohr, who was named MVP of the championship game, said he was motivated by the opportunity to send his graduated senior teammates off with a title victory to end their high school careers.

“I wanted to come out and represent SM East and our seniors,” Mohr said. They’ve given so much to the program, just being able to come out and play for them meant a lot.”

Garrett credited goalkeeper Phil Clemente with keeping Rockhurst’s point total down, particularly over the course of a series of aggressive offensive possessions by Rockhurst in the second half.

“Phil’s been awesome for us all year — he led the league in save percentage,” Garrett said. “He’s not the most fundamental goalie, but he’s really, really awesome at keeping the ball out of the goal. So don’t break it if it works.”

The game at Dunwoody Stadium on the UMKC campus was rescheduled from its originally posted time to 1 p.m. Saturday on account of thunderstorms on Friday night.

The title marked the Lancer Lacrosse program’s fifth title in the Lacrosse Association of Kansas City’s eight year history. The team won previous titles in 2012, 2013, 2016 and 2018. 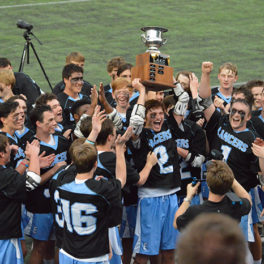