A member of the SM East baseball team that won the state 6A title in 2016 had a pretty exciting Thursday. Jake Randa, who for the past two years has

A member of the SM East baseball team that won the state 6A title in 2016 had a pretty exciting Thursday.

Jake Randa, who for the past two years has played at Northwest Florida State College, was selected by the Washington Nationals in the 13th round of this year’s Major League Baseball draft.

With a huge spring — he had a batting average of .412, 13 home runs and 52 runs batted in over 50 games this past season — Randa made himself an attractive pick for MLB teams. He’ll now have to decide whether to sign a professional contract or to continue on at the college level. He’d committed to transfer to Mississippi State following his two years at Northwest Florida, a two-year junior college.

Randa’s father Joe, who went on to a 12-year career in the majors spent primarily with the Royals, started his college career at a community college in Florida as well, and was initially taken by the California Angels in the 30th round of the 1989 draft. However, Joe chose to go on to play two more years of college baseball at the University of Tennessee. After college, he was taken by the Royals in the 11th round of the 1991 draft, which launched his professional career.

Jake was a junior when the Lancers won the 2016 state title. His teammate Joey Wentz, a senior that year, was taken in the second round of the MLB draft that summer, and is currently among the top pitching prospects in the Atlanta Braves system.

Jake’s younger brother Justin currently plays for the Lancers, and was given honorable mention accolades on this year’s All State high school baseball team. 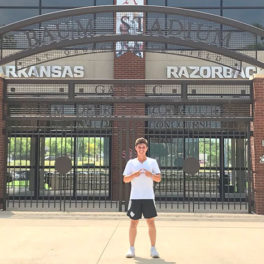