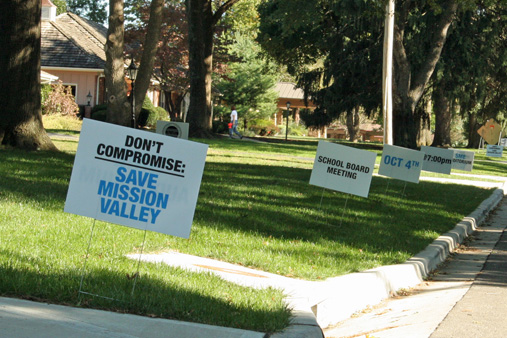 The Shawnee Mission East auditorium is likely to be a lively venue this evening as it plays host to the district’s community meeting on the proposal to close Mission Valley Middle School at the end of the school year.

Attendance at the meeting is expected to be very high; a group called “Save Mission Valley” has been organizing parents to fight the closing, and is conducted an extensive investigation into the district’s rationale for the proposal.

The Board of Education and superintendent Gene Johnson faced a room full of agitated parents on Sept. 21 when they held a community meeting on the proposal to move Brookwood Elementary into the Shawnee Mission South attendance area. The meeting tonight will be the fourth of the 11 community meetings the district has scheduled to allow parents and neighbors to give their input on the redistricting and school closing proposals that were announced in September.

The meeting starts at 7 p.m.

For a day at least, the talk among many local residents was of a school opening, not closing. A few hundred parents, students and

If this is going to be the last year for students at Mission Valley, a group of PTA parents want to make sure it’s

Effort to ‘Save Mission Valley’ gets (very) organized

A week from today, the Shawnee Mission School District will host a community meeting to get input from local parents about its proposal to

The Mustangs of Mission Valley Middle School may be heading north to pasture. Unless the Shawnee Mission Board of Education diverges from a plan