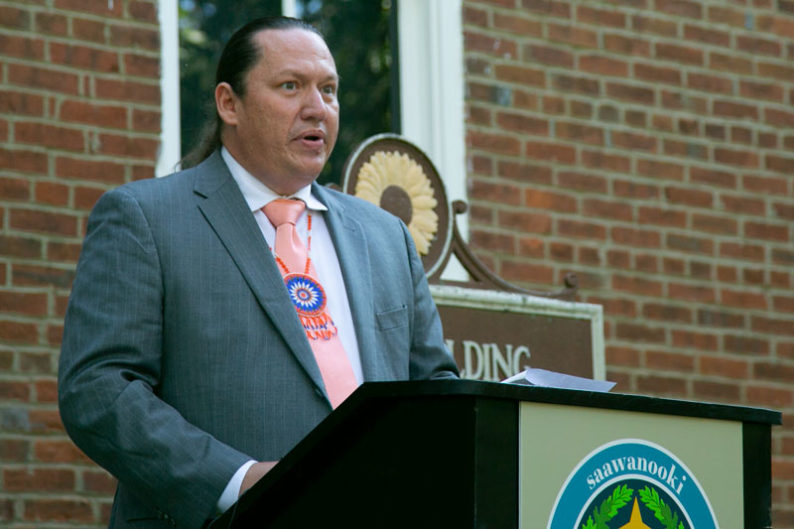 At a press conference Thursday to mark Orange Shirt Day — a memorial to the thousands of lives lost at Indian residential schools — the chief of the Shawnee Tribe announce a partnership with the city of Fairway to investigate the history of the Shawnee Indian Mission while calling on the federal government to research U.S. Indian boarding schools nationwide.

Earlier this year, the Department of Interior announced an initiative to find out the inner workings of federally-operated Indian boarding schools. Places like Shawnee Indian Mission, which was an Indian boarding school from the 1830s to 1860s on 2,000 acres of Shawnee Tribe land, isn’t included in the initiative since it was operated by Methodist missionaries.

Now, the Shawnee Tribe is partnering with the city of Fairway to begin looking into the operational details of the Shawnee Indian Mission. But Shawnee Tribe Chief Ben Barnes said the federal government “needs to step up” as well.

“It’s my moral obligation to search for these children and, if we find them, to honor them properly,” Barnes said. “While we are proud of the welcome we received from our local partners, the issue of Native American boarding schools far exceeds our collaborative work here on this site in Kansas.”

City Administrator Nathan Nogelmeier told the Post after the press conference that discussions of a partnership began in spring 2021.

Nogelmeier said the partnership came naturally, especially after Barnes reached out. The story told at the Shawnee Indian Mission is based on the information from the Kansas State Historical Society, but Nogelmeier said the goal is to uplift the tribe’s history.

“There are certainly applicable exhibits, but there are also exhibits that are not necessarily genuine in telling the story of the tribe,” Nogelmeier said. “The tribe has their own story, and we want them to feel like they can say that.”

Conversations about the partnership are still ongoing, but it’s already resulting in work.

Last week, Nogelmeier said an architectural firm used infrared technology to take a look at the buildings on the now 12-acre historical site. Funded by the Shawnee Tribe, this effort intends to identify any upgrades the buildings received over the years, and a plan for potential restoration.

More than that, the partnership is diving into the history of the Shawnee Indian Mission. Barnes said there’s still unknowns about the former boarding school, and hopes to find out names of the children who attended the school and their stories, the living and working conditions, and how many children never returned home.

Fairway operates and manages the Shawnee Indian Mission, and renewed a one-year contract with KSHS in June, Nogelmeier said. This will allow the city to determine how, if at all, its role in site operations changes with the new partnership of the Shawnee Tribe, he said.

Barnes, on behalf of the tribe, formally adopted Orange Shirt Day and encouraged Americans”to honor boarding school survivors and the memory of children who never made it home.”

It’s estimated that tens of thousands of Native American children were housed in U.S. residential schools, Barnes said. More than 40,000 children may be buried in unmarked graves at these schools, he said.

A major goal in the city and tribe partnership for Barnes is to find any potentially unmarked Native American children graves on Shawnee Indian Mission grounds. While the work may lead to “uncovering very unpleasant truths,” Barnes said the nation will find healing through the process.

“For far too long, the truth about Indian boarding schools has been absent from national conversations,” Barnes said. “Others may have forgotten, but America’s tribal nations have not. Stories of survivors have been handed down from generation to generation, and the stories of those who did not are coming to light.”

Elected officials in Fairway aren’t the only ones working on uncovering truths about the Shawnee Indian Mission.

Indian Boarding School Policies were created and enforced to strip Indigenous peopels
“of their identities, beliefs and languages,” according to the release. Children were forcibly removed from their tribal lands and families, and it is estimated that nearly 83% of American Indian and Alaska Native children were enrolled in a boarding school by 1926, according to the release.

Currently, there are 367 known Indian boarding schools in 30 states. These schools were riddled with human rights violations such as “spiritutal, physical, industrial, psychological and sexual abuse, neglect and trauma,” according to the release.

If approved by Congress, the commission would “investigate, document and acknowledge” these injustices, according to the release. Davids said in the release it “is a critical step to allow Native families and communities to begin to heal from the intergenerational trauma.”

“The U.S. Indian Boarding School Policies stripped children from their families and their cultures — actions that continue to impact Native American, Alaska Native and Native Hawaiian communities today,” Davids said in the release. “Our country must do better to acknowledge its legacy and understand the full truth of these policies.” 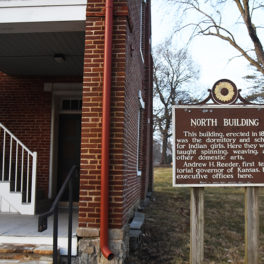 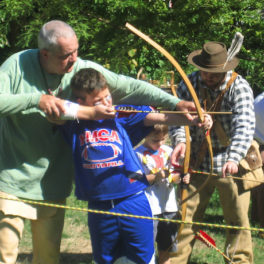