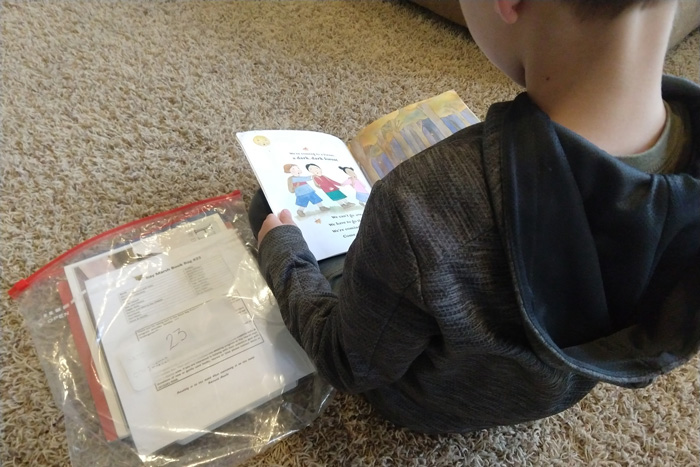 While Shawnee Mission schools are shut down for the rest of the academic year, kindergarteners and first graders at Ray Marsh Elementary have their own set of books to read

While Shawnee Mission schools are shut down for the rest of the academic year, kindergarteners and first graders at Ray Marsh Elementary have their own set of books to read at home.

These students are participating in a three-year-old book bag program launched by two siblings from Shawnee Mission Northwest who have a goal of getting books in the hands of as many elementary students as possible.

Kelly VandenBos, who is now a junior, and her brother, Will VandenBos, now a freshman at Kansas State University, launched the program three years ago to ensure Ray Marsh kindergarteners and first graders have bags filled with 10 books each to take home on a weekly rotational basis.

The VandenBos siblings, who attended Ray Marsh, got the idea from participating in a similar program while living in upstate New York.

Together, they have collected hundreds of donated books for the book bags.

About half of the students in kindergarten and first grade classes are participating, which means these students need at least 10 books each to read at home during school closures.

“I’ve gotten some thank you notes from parents for providing this program because books are expensive, when it comes down to it,” VandenBos said. “And so the fact that they could just get them from school once a week has really helped a lot of students.”

Jennifer Price, a first grade teacher at Ray Marsh whose family is close with the VandenBoses, participated in the pilot program. Price also helped with initial collections; and now that the program is fully launched, her students can each have their own book bags to take home.

Price said she particularly enjoys the variety in each book bag because it introduces her students to new genres they may not have tried reading before.

“They get very, very excited about it,” Price said. “At least they have 10 books that they can continue to enjoy during this time. It’s been such a wonderful program for the kids. Just very grateful that the VandenBos children have taken this on.”

Meghan Stigge, librarian at SM Northwest, who teaches Kelly VandenBos in her international baccalaureate class, said the book bag program is great for students who may not have books at home.

“We educators worry so much about divides in achievement, and this is a program that helps to close that divide,” Stigge said. “And the fact that a student started it on their own, it’s just so impressive.”

Stigge said librarians everywhere, including herself, initially lamented the loss of books due to the school closures.

“That progressed to me lamenting, wishing, I could get more physical books out to students, in these times when we’re all locked in,” Stigge said. “Obviously, that’s not safe or healthy at the moment. I’m well aware of the benefits of reading, and I just wish all kids had books in their hands.”

VandenBos said she would eventually like to switch the book bags from plastic to reusable canvas bags. And she’d also like to hand off the project after she graduates, and see other high school students expand it across the Shawnee Mission School District.

“There are several underserved schools that have contacted me about possible expansion and their interest in it,” she added. “That has been one of my biggest concerns, is figuring out who has a heart for this and really would want to take it to the next level.”