Merriam Park Elementary and Health Partnership Clinic this week marked the one-year anniversary of the school-based health clinic. (The clinic opened in late January 2018, but a previously scheduled event

Merriam Park Elementary and Health Partnership Clinic this week marked the one-year anniversary of the school-based health clinic. (The clinic opened in late January 2018, but a previously scheduled event recognizing the milestone was canceled on account of bad weather).

Health Partnership staff serves Shawnee Mission students and their siblings up to age 18 — regardless of their status with health insurance. On staff at the clinic are a family physician, a medical assistant, front-desk staff, a psychologist and a dental hygienist.

“School-based clinics are of enormous benefit for the academic lives of the children that we serve,” Mourad said.

The health clinic is open at Merriam Park Elementary two half-days each week. Initially, the clinic had no plans to open during the summer hours, but the demand for services grew so much that Health Partnership decided to extend services through the summer as well.

Since opening last year, more than 250 students have received medical, behavioral health and/or dental services at the clinic. Of all clinic visits, 60 percent were checkups of students in good health.

“We’re really excited about what we’re able to do for these kids,” he said.

The anniversary celebration has also been a time for reflection on the clinic’s first year in service. Mourad said Health Partnership and the Shawnee Mission School District are taking a holistic view of each student’s health and wellness in congruence with his or her education. School-based clinics have been proven to decrease tardiness, behavioral health referrals and absences, he added.

“When we’re able to intervene to help kids out so that they’re able to function in school, this helps them with their academic lives; this also helps them as far as outcomes,” Mourad said. “And also, because a lot of kids are underserved, we’re actually able to maintain some health equity as well, and that’s a growing problem in Johnson County.

“Last but not least is we’re providing another point of access. So we’re able to step in and say we will be your healthcare home, your medical home, in the school. In so doing, we’re able to help improve community health. So that ultimately is the holistic view that we’re after.” 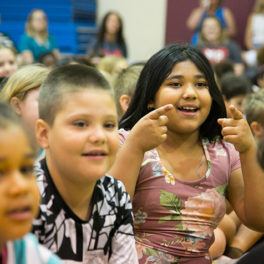