In just a few short days, some rising fifth and sixth graders at Apache Innovative School have become engineers. The students collaborated in small groups this summer to create a

In just a few short days, some rising fifth and sixth graders at Apache Innovative School have become engineers.

The students collaborated in small groups this summer to create a scale drawing of the Kansas City streetcar route and program a Sphero mini robot to simulate the stops. The Summer Math Learning Showcase last Thursday was the students’ opportunity to demonstrate what they learned.

The challenge was part of a summer camp, the Isabel Helmuth Summer Acceleration Program, for 52 rising fifth and sixth graders at Apache. Joanna Roche, Apache instructional coach, said the students learned coding and had “a lot of perseverance” to complete the challenge.

LouLou and Natalie, rising fifth graders, said they didn’t quite complete their streetcar route — the last leg of the route required a ton of geometry, and the students only had a few days to work on it. Their robot managed to follow the streetcar route from Union Station to the City Market.

Natalie recalled their first victory, when they managed to direct their robot to reach its first stop, from Union Station to Crossroads, precisely to scale with the route.

“We were so excited because we had been working for like an hour on it, and it just kept glitching,” Natalie said. “It’s been really frustrating trying to get the streetcars exactly where they’re supposed to go. And it took the teachers and the students awhile to figure out how we were going to measure the curve.”

Roche said she got the idea for the summer program from some work she did in graduate school. Her hope is to change students’ mindsets toward mathematics-related fields, such as science, engineering and technology.

“I just wanted to start a summer program for kids to really impact their motivation and interest and their attitudes about math,” Roche said. “It’s just really looking at getting kids excited about math, informing what they think a mathematician is — it’s not about worksheets and memorizing. It’s about patterns and discovery and collaborating.”

Roche said her goal was to gear summer programming on opportunities in science, technology, engineering, art and design, and mathematics toward elementary students. Roche noticed other unintended but positive outcomes, including opportunities for students to demonstrate leadership and make friends with each other.

Nafira and Mareli, also rising fifth graders, said aiming the Sphero was one of the more difficult parts of the challenge because it required precision and angles. Both of them have said they’re interested in engineering.

Throughout the past two weeks, the summer program participants have also gone on several field trips and worked on other projects. They met with the Society of Women Engineers and visited the School of Economics. Roche said she hoped introducing the students to experts in the field would “open their eyes to things that maybe they didn’t know existed.”

The Shawnee Mission Education Foundation funded the entirety of the program through a gift from the late Isabel Helmuth’s family. The program was piloted at Crestview Elementary last year for rising first, second and third graders, and expanded to include Apache this year. 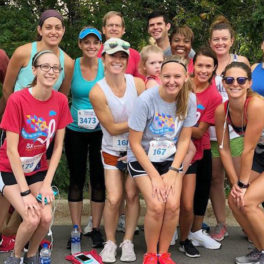