The MainStream Coalition this week announced that Roeland Park City Councilman Michael Poppa, whose term expires at the start of next year, will succeed Brandi Fisher as executive director.

Poppa, who is currently employed as director of member engagement at the NEJC Chamber, will move into the role with MainStream on Jan. 1. Fisher announced earlier this year that she would be stepping down after leading the organization since 2011.

Poppa said he was first introduced to MainStream in 2014 as he was working as an advocate with Equality Kansas on the passage of a non-discrimination ordinance in Roeland Park — what would become the first such ordinance offering legal protections for LGBTQ+ individuals in Johnson County. He said MainStream was a valuable supporter of that push, and that he’s “been a supporter ever since.”

Poppa said that while he was sad to leave his position with the chamber, he was excited to be able to actively return to advocacy work.

“I have been missing that part for the past few years,” he said. “On the city council, I serve as somebody’s voice, I represent my constituents. But in advocacy work, you get to give people the tools to have their own voice.”

Poppa said he’s been in contact with members of the MainStream board and staff about plans for the coming months, and that he was excited to continue the organization’s focus on voter turnout. MainStream’s voter-to-voter initiative, which is headed up by former Kansas City, Kan., mayor’s office staff member Lindsay Behgam, works to increase turnout using a peer model, where people encourage non-voting friends to get to the polls.

“That’s all about turning out citizens who are underrepresented in the political process,” Poppa said.

Founded in 1993 by former Village Presbyterian pastor Dr. Bob Meneilly and five others, the MainStream Coalition set out as its mission to “guard against the encroachment of religious doctrine into the public space” and to “respect for the rights, beliefs, and freedoms of all individuals.”

At MainStream event in OP, Gov. Kelly stresses distinction between politics and partisanship

Ethan Corson, a Fairway resident who served as executive director of the Kansas Democratic Party for two years, announced today that he will seek 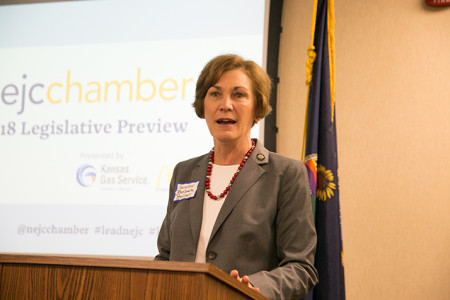 Dr. Barbara Bollier, the Mission Hills state legislator who switched parties from Republican to Democrat in 2018, announced this morning she was mounting a

Three Johnson County residents have been selected to join the board of the Dwight D. Eisenhower Excellence in Public Service Series for the coming

Education First Shawnee Mission, the political action committee formed in 2017 to promote strong public schools in the area, has released its endorsements for

The 2020 election cycle may be more than a year away, but Republican Rep. Tom Cox’s announcement that he plans to seek a move

Republican Rep. Tom Cox on Monday announced he will seek the District 10 seat in the Kansas senate that’s been occupied by Mary Pilcher-Cook

Overland Park attorney Michael Kuckelman was elected to a two-year term as chair of the Kansas Republican Party over the weekend. Kuckelman has been

An opinion piece by area state Sen. Dinah Sykes  laying out her reasons for leaving the Republican Party and becoming a Democrat has taken

Prairie Village native Zach Colby never in a million years thought he’d get involved in politics. A standout soccer player during his time at