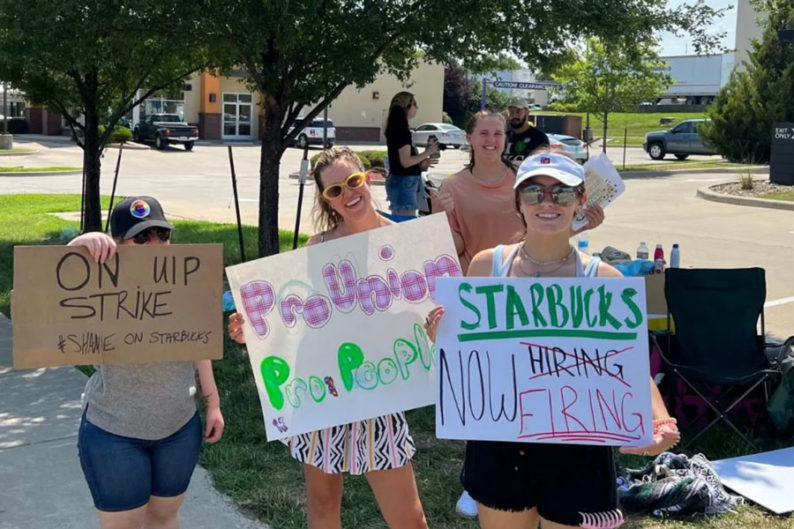 By Mili Mansaray  On Aug. 1, wage increases and an improved benefits package went into effect for Starbucks stores across the nation — but not for any of the stores that

On Aug. 1, wage increases and an improved benefits package went into effect for Starbucks stores across the nation — but not for any of the stores that have unionized. The next day, workers at the 75th Street and Interstate 35 location in Overland Park went on strike, protesting this exclusion and unfair labor practices.

“We’re out here because on Thursday (July 28), our fifth pro-union partner got fired. And we believe they were wrongfully terminated,” said Katie Kreutzjans, a barista who has worked at the location for six months.

Starbucks stores throughout the country have seen an uptick of unionization in response to poor working conditions, unfair labor practices and union busting efforts, according to workers. And in the midst of this process, some employees say they feel undervalued by Starbucks, including workers in Kansas and Missouri.

The Overland Park location became the first store in Kansas to unionize, with a 6-1 vote on April 8, although all seven of the votes have been contested by Starbucks. Since winning their election, employees still have concerns about their working conditions.

At the strike earlier this month, workers gathered in front of the store with signs reading “Starbucks now firing” and “Shame on Starbucks” as they cheered themselves on and kept cool with cold water bottles and a bucket of water balloons.

Some cars drove by and honked in approval, inciting cheers from the crowd. Despite the heat, morale remained high.

“We’re just fed up with all of it. It’s really frustrating. So we’re using our right to strike and taking advantage of that out here today,” Kreutzjans said.

Difficult working conditions and a feeling of voicelessness were what inspired workers to unionize, they said.

According to Starbucks spokesperson Reggie Borges, the corporation does not believe unions are necessary as problems are best solved by direct communication with partners, the term Starbucks uses for its employees.

“We’ve been clear from the beginning that we respect partners’ choices and legal rights to organize. We’re also clear in our beliefs that we’re better together without a union between us,” Borges said.

Yet according to several employees, there were various instances in which workers endured inconvenient and, at times, dangerous circumstances despite employee pushback.

“They refuse to close the store if there aren’t enough workers, but then they keep firing pro-union workers, so we’re chronically understaffed,” said Sage Quigley, a barista trainer who has been at the location for two years.

Currently, the store only has two shift managers even though it needs at least five, according to Quigley. And a full floor of staff is usually six to nine people, but right now the location has around five people.

The employee bathroom also used to be frequently blocked off with deliveries due to the tight space, making it difficult for workers to access the restroom. Even before unionizing, they were able to advocate for and get a storage pod.

The store has also had issues with the air conditioning. “We’ve had leaking AC systems to where it literally is pouring on us while we’re working,” Kreutzjans said.

In the most recent instance, the air conditioning went out and many employees said the corporation did not prioritize the needed repairs.

“Our AC has been off for a week and a half, and they refuse to close the store and let people cool down or go home,” Quigley said.

In the midst of the long sweltering days of summer, there were days the baristas showed up to work and documented temperatures inside reaching over 100 degrees.

The unit broke July 21, and the store eventually put in a new air conditioner Aug. 1. Starbucks insists the issue was handled swiftly.

“The Starbucks engineering team replaced the broken cooling unit. During the time the cooling unit was out of order, the store closed on more than one occasion due to excessive heat inside the location,” according to Borges.

According to workers, this doesn’t paint the whole picture.

“We would close early some days, but the majority of the day we were still open and working, even without AC,” Kreutzjans said.

These new benefits, however, will not be extended to unionized stores due to a legal technicality.

American labor laws prevent the corporation from making changes in benefits without a collective bargaining agreement between the company and the union. This agreement is a contract that is negotiated at the end of the unionization process — covering topics such as terms and conditions of employment, wages and benefits.

“Partners still have access to all Starbucks benefits already in place when the petition was filed, but any changes to wages, benefits and working conditions that Starbucks establishes after that time would not apply to and would have to be reviewed in bargaining,” said Borges.

“Workers United refuses to stand by while Starbucks cynically promises new benefits only to non-unionized workers and withholds them from our members,” Workers United president Lynne Fox stated in a recent letter to Schultz obtained by CNBC.

In addition to improved benefits, workers at the Overland Park location want to feel valued.

“The working conditions we’re fighting for are basically just having working bare minimum stuff that we shouldn’t have to be out here striking for,” Kreutzjans said. “We just expect them to listen to us when we have those complaints. And to make it a priority to make that happen, which they haven’t been doing.”

Mili Mansaray is the housing and labor reporter at The Kansas City Beacon. Previously, she was a freelance reporter and Summer 2020 intern. 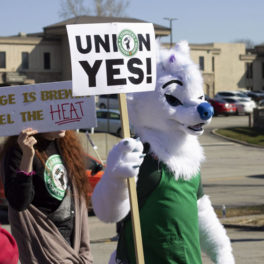 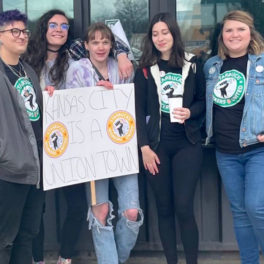