The electric scooter rentals that have been zipping around downtown Kansas City for the past few months are showing up more and more frequently in the Shawnee Mission area.

But just where and how they can be legally ridden in northeast Johnson County is somewhat fuzzy.

Electric scooter companies like Bird and Lime haven’t officially set up operations in Overland Park, Lenexa, Shawnee or Prairie Village, according to city officials — but that hasn’t stopped riders from taking the vehicles into the area. Because the phenomenon is so new, cities here have not directly addressed electric scooters regulations yet, especially concerning public safety and right-of-way.

Sean Reilly, communications manager of Overland Park, said the city has not been approached by any scooter company.

“When a scooter company comes to Overland Park, it would then be addressed,” Reilly said. “From a police perspective, motorized vehicles operating on a city street need to be licensed. However, and I want to be very clear, I am not sure how a scooter would be defined or if it would be considered to be ‘motorized.’”

Furthermore, Overland Park and other cities will need to follow the lead from the Kansas Department of Revenue if the state determines that electric scooters must be licensed, Reilly added.

“The issues we’ve had with the few we’ve had are that those who ride scooters and bring them into Overland Park will leave them in the right-of-way: On the sidewalks, in between the curb and sidewalks,” Reilly said, adding that Overland Park police have removed them and contacted the companies.

“Additionally, our community development team said they anticipate this topic being discussed as part of our complete streets study, which has just begun,” Redina said of the city project geared toward accommodating all types of transportation in Lenexa.

Capt. Byron Roberson of the Prairie Village Police Department said the city does not specifically regulate electric scooters, which are not considered motor vehicles and are prohibited on city streets. City code does not currently prohibit scooters from being ridden on sidewalks.

“Some have asked how they differ from bikes, and the short answer is that the state specifically addresses bikes and defines what they are as a type of equipment that can be rode upon the roadway,” Roberson said.

Northeast Johnson County cities are likely to have to tackle the issue head on in the coming months as demand for the scooters continues to grow. For example, the Downtown Overland Park Partnership has been actively looking into options to bring scooter companies like Bird and Lime into the area. Kate Sweeten, executive director of the partnership, said the electric scooters would hopefully make the downtown area more accessible and reduce parking issues. Likewise, the scooters could also reduce the city’s carbon footprint.

“Personally, I’ve used them quite a bit in the midtown area of downtown Kansas City,” Sweeten said. “I love the convenience factor behind them. We think it would be a fun way to get someone from one side of downtown to the other. It’s a fun, alternative mode of transportation for folks who come down to the area.”

Those long waits at the driver’s license office the state was working to fix this summer? They’re still here

The wait isn’t over yet. After customers at several Johnson County driver’s license offices dealt with significant wait times this summer, the Kansas Department

Out on the spongy, rain-soaked soccer field on the Sprint campus, young women from Saudi Arabia shared the love of the game with girls 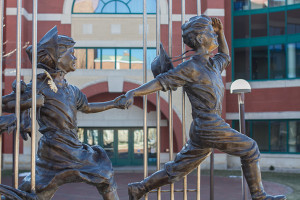 Don’t be surprised if you see some folks in grey t-shirts out and about in your neighborhood this weekend. The Johnson County Department of

After a tree fell at the Shawnee Indian Mission, one local resident decided to turn some of the wood into archery bows. Randall “Hutch”

The shooting of 17-year-old John Albers by an Overland Park police officer earlier this year has spurred local residents into action. A new group