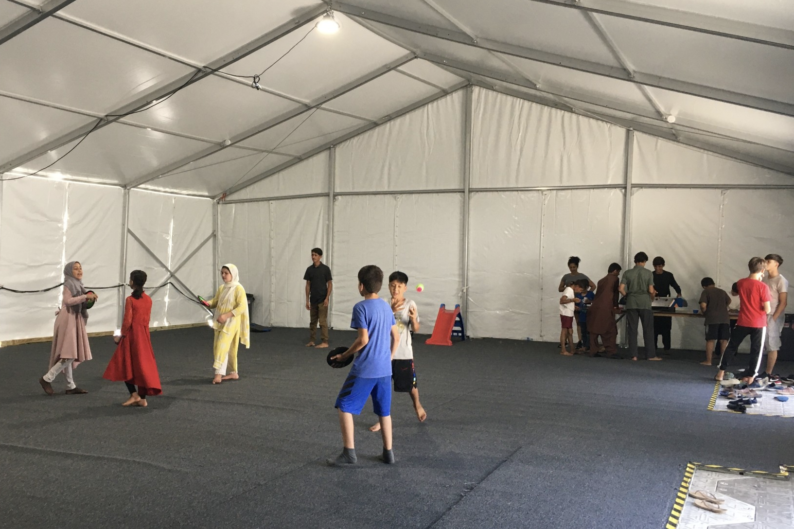 By David Condos, High Plains Public Radio Hundreds of people evacuated from Afghanistan will start new lives in Kansas over the next few months. That has refugee resettlement groups rallying

Hundreds of people evacuated from Afghanistan will start new lives in Kansas over the next few months.

That has refugee resettlement groups rallying their staffs and volunteers to find homes, jobs and a myriad of other essentials for the families who fled their war-torn country in the wake of the American withdrawal.

A majority of the Kansas newcomers will land in Wichita, where The International Rescue Committee, or IRC, plans to resettle 400 of the roughly 500 Afghan evacuees headed for the state. The first Afghans should arrive by mid-October.

Michele Green, executive director of the IRC’s Wichita office, said the total number of evacuees will likely be more people than her staff usually resettles in an entire year.

And because the people coming from Afghanistan aren’t technically classified as refugees — most will arrive as humanitarian parolees — it’s still unclear if and when they all might get the same type of federal safety net benefits and financial support that refugees do.

“Because everything’s happening so fast … it’s a little kind of up in the air,” Green said. “We’re just taking it day by day.”

It’s a similar story for other Kansas organizations from Garden City to Kansas City, where the speed and magnitude of the influx will make this resettlement especially challenging.

“These people were in their home one day, and they are on a plane the next day,” Debbie Snapp, executive director of Catholic Charities of Southwest Kansas, said. “So it’s a disaster response almost as much as it is a migration response.”

The federal government typically notifies local partners at least two weeks before a refugee family arrives in town. But this time, organizations will likely just get 24-48 hours’ notice.

That makes it harder to line up things like housing and furniture.

“We’re just trying to stay positive in the midst of a really difficult situation,” said Kasey Featherston, director of refugee and immigration services for Catholic Charities in Kansas City. “We know that’s what our clients deserve: to be welcomed and feel welcomed.”

In the Kansas City area, some of the evacuees from Afghanistan have already started to arrive.

A few weeks ago, Catholic Charities in Kansas City resettled a family of five that was evacuated from Afghanistan with a special immigrant visa as the country came under Taliban control.

In all, the organization plans to resettle at least 75 Afghan evacuees through the end of this year in Kansas City, Overland Park, Olathe, Lawrence, Manhattan and, potentially, Topeka. But Featherston said that number is likely to inch up closer to 150 people as time goes on.

In southwest Kansas, Catholic Charities expects to welcome 25 Afghan evacuees to Garden City and Dodge City starting in the first half of October. That marks a big jump for the agency, which saw its resettlement numbers drop from 47 people in 2018 to fewer than 10 in the past year.

But Debbie Snapp said the organization had already begun adding more workers and volunteers over the past few months in response to President Joe Biden raising the federal refugee cap.

“We feel like we’re ready,” she said. “We’re just waiting for the notice that they’re coming in so we can get started.”

So where are the Afghan evacuees now?

The ones who have arrived in the U.S. are currently spread out at military bases across the country for final security vetting and processing with the State Department. They’re also going through a full medical screening, which includes being vaccinated against COVID-19 and other diseases.

That’s part of the reason why more of them haven’t arrived in Kansas yet: They have to wait at least 21 days after their measles shot before they can travel.

Even though some Republican politicians like U.S. Rep. Jake LaTurner and U.S. Sen. Roger Marshall have stoked fears about the security and health risks of the state welcoming the evacuees so quickly, Michele Green of the IRC said those concerns don’t line up with reality.

“The evacuation is immediate,” she said, “but the process that they’ve been going through has been ongoing for quite some time.”

Green has spent time working on the ground in Afghanistan, so she’s seen the vetting process first-hand. She said that most of the evacuees have gone through years of vetting as part of their work with the U.S. government or military in Afghanistan, in addition to the vetting that’s happening at military bases now.

“The bigger concerns,” she said, “are ensuring that they get the services they need to really integrate and become self-sufficient in our community.”

Once the evacuees reach town, the organizations will help connect them with essentials like medical care, employment and education.

In cities with existing Afghan communities — Green estimates that Wichita has around 200 Afghans already — connecting evacuees with people from their home country will also be key in helping them process what they’ve been through and feel more at home.

And the organizations said they’re already seeing their cities step up to volunteer and donate.

“We’ve had an incredible response,” Kasey Featherston in Kansas City said. “So it’s been really heartwarming to see the community respond.”

People who want to support these organizations’ efforts have a number of options, ranging from donating money or household items to volunteering to help an Afghan family navigate life in a new country.

And Green said that the benefits of volunteering go both ways: Kansans who take the time to get to know people arriving from Afghanistan might find that they have more in common with these new neighbors than they expected.

“They’re incredibly warm and fun-loving people,” she said. “Just give it a chance.”

You can find out more details about supporting resettlement efforts by contacting these Kansas organizations:

David Condos covers western Kansas for High Plains Public Radio and the Kansas News Service. You can follow him on Twitter @davidcondos.

Kansas News Service stories and photos may be republished by news media at no cost with proper attribution and a link to ksnewsservice.org