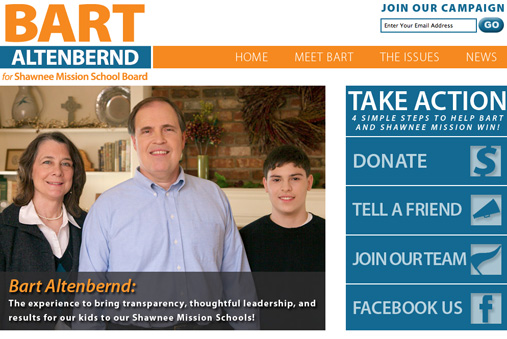 Prairie Village resident and former Westridge Middle School assistant principal Bart Altenbernd has launched a Web site promoting his campaign for the at-large position on the Shawnee Mission board of education.

Altenbernd, who is one of four candidates vying for the position, has a son who attends Mission Valley.

In the issues section of his site, Altenbernd says he wants to bring more transparency to the board:

The recent school closure plan was flawed from the beginning. As a parent of a student in the district, I was dismayed at the lack of community involvement in the decision-making process. I believe my experience working with parents and communities could have helped the district’s administration develop a fairer and more open process.

Our citizens pay the bills for the district, and they should be consulted early and often. Stakeholders need to be brought to the table from the beginning to voice concerns and provide input. It’s the only way to create a defensible plan.

A look at election ballots in Fairway and Mission Hills

We reported earlier this week on the race for Prairie Village mayor and the at-large seat on the Shawnee Mission board of education, so

Four vying for at-large seat on Shawnee Mission School Board

A small stampede to the clerk’s office Monday and Tuesday filled out the ballots for many of April’s local elections, including the at-large seat

Michael Kelly, a technology salesman and current member of the Prairie Village city council, will file today for April’s mayoral election, he told the

The filing deadline for April’s election is just a few days away — but to date, many of the local offices up for election

If you aren’t one of those eager beavers who took advantage of Johnson County’s early voting options, don’t worry: you can still exercise your

Incumbent Terrie Huntington, who was elected to four terms in the House before taking over the Senate seat vacated by David Wysong last year,