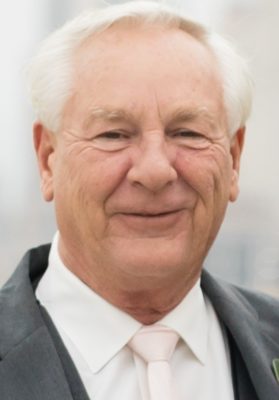 James (Jim) Joseph Perryman Jr., loving husband, father, and friend, unexpectedly passed away following complications from heart surgery at the age of 67 in the presence of loved ones on Wednesday, January 18, 2023 in Liberty, Missouri.

Jim was born on February 18, 1955 to James and Delores (Dee) Perryman in Kansas City, Missouri. He completed his primary education at Christ the King Catholic School before graduating from Bishop Ward High School as a member of the class of 1973.

After graduating from high school, he enlisted in the Navy and served on the USS Franklin D. Roosevelt (CVB/CVA/CV-42) aircraft carrier assigned to the Atlantic Fleet and homeported in Mayport, Florida. He was part of the flight deck crew responsible for working with the arresting gear to assist aircrafts decelerate and land. As part of his service, Jim was fortunate to see the world at an early age, and travel would be one of his lifelong passions.

When his service concluded, Jim joined the private sector and went to work for General Motors. He contributed more than 30 productive years successfully working in various roles at GM until his well-earned retirement in October 2011.

Family was everything to Jim, and retirement enabled him to spend more time with the love of his life, Karre (Kraxner) Perryman, whom he married on September 20, 1986, and with whom he raised two daughters, Lauren and Lindsey.

Jim was in constant service to his family. When he wasn’t collecting the constantly falling walnuts in the yard, he might be in the garage ensuring Lindsey’s car had a properly functioning front wheel. While he may have worked hard, he played hard too. Jim enjoyed serenading his daughters with Brown Eyed Girl, exchanging recipes for a delicious new dinner dish, and spending time planning many family vacations.

Jim was adventurous and his travels took him and Karre to Mexico, the Caribbean, and Europe. He also made an annual excursion to Las Vegas with friends that included plenty of pool time as well as shows such as Beatles Love at Cirque du Soleil. However, Jim didn’t need to leave home to see the iconic 1964 Beatles concert in Kansas City at Municipal Stadium.

Sports also played a prominent role in Jim’s life. He held season tickets to the Chiefs for a number of years, and every home game meant bonding with friends while tailgating at Arrowhead Stadium. When he no longer held tickets, he and his friends had a tradition of gathering to cheer on the Chiefs at a local establishment. He was also fortunate to attend such iconic sporting events as the World Series and the Indianapolis 500. He enjoyed golfing and even spent time as a golf course martial in retirement.

Whether his team won or lost was irrelevant. The most important thing was gathering with family and friends to create memories.

Jim is survived by his wife, Karre Perryman; his daughters, Lauren (Kyle) Fowler, Lindsey Perryman, and Lisa Blevins; and his sister, Pamela S. Lawrence. He was predeceased by his parents, James and Dee Perryman.

All those who loved Jim are encouraged to honor his legacy by living life to the fullest and creating more memories.

In lieu of flowers, and in recognition of Jim’s soft spot for our vulnerable pet friends, please consider a gift in his name to Reno Ranch Rescue

(https://www.renoranch.org), a nonprofit animal rescue service providing assistance and advocacy for pets who are in danger.