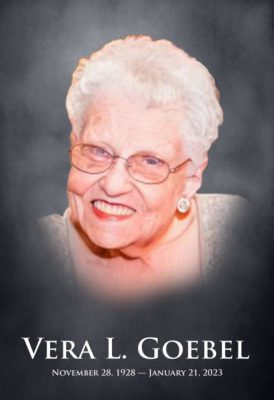 Vera was born November 28, 1928 on her parents’ farm outside of Yates Center, Kansas, the second of three sisters. She walked across the fields to a one-room schoolhouse under the care of her older sister, Frances and later was the guide of her younger sister, Betty. When she graduated from the eighth grade, she boarded in the town of Yates Center in order to attend high school there. Vera met the boy she was to marry while working at the J.C. Penney store on the town square. Ralph Goebel, from neighboring LeRoy, Kansas, joined the Army during World War II and the couple planned to marry after the war. Soon after his return, Ralph lost an arm in an auto accident. This ended their plans to enter into farming and well-meaning friends and neighbors urged Vera to break the engagement but were surprised when the soft-spoken, gentle Vera refused. She and Ralph married October 16, 1948, on her family’s farm and they eventually settled in Shawnee, Kansas, where they raised their family and later spoiled their grandchildren.

Vera’s family meant the world to her. She spent countless hours in attendance at her children’s football and baseball games, stayed up late washing the team uniforms and then began again the next day; her loving support of her husband’s passion for sports allowed him to officiate at youth sporting events well into his seventies. Her husband and children adored her.

She made her children’s spouses true members of her family and cherished her grandchildren, and her home was the safe place and the center of the universe for the whole family. Her later years were enriched by the caring staff and good friends she made in the community at Homestead of Shawnee. Vera’s loving, non-judgemental nature was a model for her family, life-long friends and neighbors. No one ever left her presence without feeling understood and appreciated, and no matriarch ever wore her crown so lightly.

Vera is preceded in death by her parents and husband, Ralph Goebel, and her sister Frances Meyer.

In lieu of flowers memorial contributions may be made to the Shawnee United Methodist Church, 10700 Johnson Dr, Shawnee, KS 66203 https://www.shelbygiving.com/app/giving/shaw3120574 listing in memory of Vera Goebel.