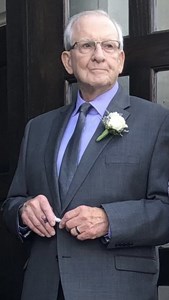 John Guy Cisternino, 79, of Overland Park, KS, passed away January 15, 2023. John was born July, 1943 in Staten Island, New York, to Lauro and Carmela Cisternino. He grew up in Brooklyn. John enlisted in the Army in 1962 and served for 24 years in Army & National Security and Defense Intelligence.

John met the love of his life, Regina, in Brooklyn, on a blind date when they were 15 years old at a dance held at Brooklyn Prep High School. They were married on December 28, 1963 and enjoyed 59 wonderful years of marriage. The day after their wedding, John reported to Officer Candidate School at Fort Benning, near Columbus, GA.

John & Regina enjoyed family, travel and dining in exciting places at home and abroad. The Cisterninos lived in Frankfurt, Germany, for three years, as John was stationed in Frankfurt. He was especially fond of their visits to the Bavarian town of Garmish-Partenkirchen and to the many Christkindlmarkets in Munich, Oberammergau, Nuremberg and Berchtesgaden.

John finished his military career as a Lieutenant Colonel in the U.S. Army, Fort Leavenworth, KS, (1981-1986). He then went to work in the legal realm as Chief Deputy Clerk of Court, US Bankruptcy Court for the Western District of Missouri, eventually serving 15 District, Magistrate and Bankruptcy Judges, as Chief of Operations for both the Federal District and Bankruptcy Courts. He retired from the Court in 2008.

John was preceded in death by his parents, his brother, Louie, and sister, Annette. He is survived by his wife of 59 years, Regina Cisternino; daughters Danielle Moerer (Steve) and Michelle Shearon (Boyd); grandchildren Chloe Patterson (Daniel), Mia Prins (Rudy), Lana Moerer and Liam Shearon. He also is survived by his brother Victor Cisternino (Mary Jo) of Rye, New York.

“Poppa John” will be remembered well and dearly missed by all who knew and loved him, especially his smarts and great sense of humor! The family wishes to expressly thank the personnel at Olathe Medical Center, Critical Care Unit, for their tender love and care.

Visitation will be held from 10:30-11:30AM on Friday, January 27th at Penwell-Gabel Funeral Home, Olathe Chapel. A prayer service will follow at 11:30AM. Inurnment will be 1:30PM at Fort Leavenworth National Cemetery.

John was a generous and caring man. He was a participant in the U.S. Veteran Affairs Million Veteran Program (MVP), a national research program focused on learning how genes, lifestyle, and military exposures affect health and illness. Many diverse foundations were dear to his heart. In lieu of flowers, donations can be made to Toys for Tots or Catholic Charities.