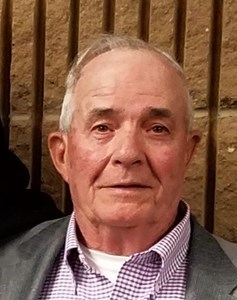 Duard Elmo Green Jr., 82 years old, of Stilwell, KS, beloved husband, father, grandpa, uncle, brother, and friend, passed away at home on Monday, January 16, 2023, after a short battle with bone cancer; his wife, Mary Jo and daughter, Stacey at his bedside and later surrounded by family.

He was born to parents Duard Elmo Green Sr. and Harriett Estelle (Sperry) Green on July 7, 1940 in Kansas City, KS. Duard attended Spring Hill High School where he met the love of his life in citizenship class Mary Jo Cantrall. He married Mary Jo on October 11, 1959 at the Spring Hill United Methodist Church. They were married 63 years at the time of his death.

Not an idle man in his younger years, Duard would work night and day. During the day he would rough in houses and by night he worked 3rd shift at Delco. He was employed on October 15, 1958 by General Motors, Delco Remy Battery Division in Olathe, KS. He built lifelong friendships with several co-workers and were camping and fishing buddies; they called him “Elmo”. Acknowledged for his work ethic with perfect attendance and a member of the UAW Local 1021, he retired with 33 years of service after an accident at home left him with a neck injury leaving him unable to work.

He had several passions to include: fishing for crappie and walleye, camping with family and friends, hunting pheasant, working on engines (automobile, cycle and tractor), gardening, John Deere tractors (member of the John Deere Two Cylinder Club), mowing grass, and pushing snow for the neighbors. Duard never met a stranger. He would reminisce about the good old days, he would tell great stories and talk your ear off. He loved his dog Bell (first hunting dog) and Princess (lap dog). His greatest joy in life was family and friends. He was known as, “Pop’s” to all the kids and some adults too. He loved them and would do anything for them. He would offer his love and advice to anyone that needed it.

Duard is preceded in death by many loved ones, in particular, his mother, father, and younger brother Jack Green.

Duard’s proudest moments were being Samuel and Jacob’s papa. Papa never missed a birthday, school pick up, school sporting event or activity they were involved in and always present for each hay season, offering a helping hand when needed, suggestion, or life experience about the farm. Papa would follow those boys to the end of the earth if it meant more time spent with them. He would either be in the field on a tractor, four wheeler or in his air conditioned truck on extremely hot days never leaving until the work was done and the hay was in the barn (sometimes in the early morning hours). Papa is the “Greatest Man” we have known and is and forever will be our “Hero”!

A celebration of life service will be held for Duard at the Paola Lighthouse Church, 1402 E. 303rd St, Paola, KS 66071, on Saturday, February 4, 2023 at 10:00 am with fellowship and a meal catered by “Jumpin Catfish” to follow. In lieu of flowers, donations can be made to the Duard E. Green Memorial in care of Paola Lighthouse Church for boys and girls to learn to fish and live to love it and family assistance program.

Duard’s interment of ashes will be at Pleasant Valley Cemetery Overland Park, Ks at a later date.