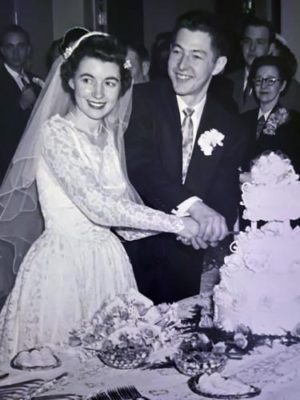 Overland Park, Kansas – Don Knowles was at long last called home by our Lord Jesus Christ, freed from the bonds of Alzheimer’s and reunited with his loving wife Jan. 4, 2023, just shy of his 93rd birthday.

On paper, Don was an accomplished man. He was a college graduate, a Marine, a war veteran, an executive vice-president, and a foundation director. Although impressive, they were not the most important titles to him. Don was so much more. And at the end of his life, he was surrounded by his family who loved him for being their loving father, grandpa, great-grandpa and steadfast pillar, who stood firm for the Lord.

It all started back in Millwood, Washington, a suburb of Spokane, where Don was born and raised. Don’s father worked for the railroad which assured them meals on the table during the Depression. He and his brother were encouraged to work hard from a young age. And so Don did.

In seventh grade, Sister Mary Elana Olivera at Our Lady of Lourdes Academy knew Don was special. She gifted him a special wooden crucifix for his hard work, dedication and straight A’s. He kept it with him in his bedside table until his dying day. He was more than a student, he was determined.

Don went on to Lewis and Clark High School where he made life-long friends. A crew of them formed a club and called themselves the Fearless Five and Castle. Together they had many adventures, and stuck together through the ups and downs of life. Don was more than a friend, he was the glue that kept them together.

After high school, Don knew he needed money to go to college, so he took all kinds of jobs. He worked at Sears & Roebucks and even shoveled coal. He also enlisted in the Marine reserves in December 1947. By May 1949 he was a corporal.

In the meantime, Don attended Gonzaga University. When asked what he majored in, he joked that it was Duration Engineering. This is because the call of active duty interrupted his education in August 1950 for the Korean War. He served well, earning a Sergeant rank, until he was Honorably Discharged in February of ’52. But then it was back to college, where he earned his degree in Business Administration in 1954. Don knew how to persevere and endure.

Although he met the love of his life in high school, they did not start dating until college. It started with a last minute date for a Sadie Hawkins dance. Don said he liked dancing with Mary Ann, and their subsequent dates grew into a love that lasted a lifetime. Each day after work, he would enter the house and call out to Mary Ann saying ‘Lucky, I’m home!’ They were married for over 67 years before Mary Ann passed in 2021. Don was a loving and faithful husband.

After graduation, Firestone came to Gonzaga for interviews and snatched Don up. Employment with Firestone took Don and Mary Ann from Spokane to Seattle to Moscow, Idaho to Ontario, California and finally to Santa Ana. By this time, his family had grown to three children. Intent on doing what was best, Don accepted a position in 1969 with The Lewer Agency in Kansas City and moved the whole family to KC in 1972.

Don rose through the ranks from salesman to executive vice-president. Don was a relationship builder who always stressed long-term relationships. It showed everywhere he went. He always said that the best Master’s Degree you could earn was traveling all around our country and the world, meeting and learning from people of all cultures. He traveled to almost every state in the continental U.S. and even spent one year in Munich, Germany opening a TLA satellite office. Don, a people-person, earned this Master’s, and created friendships that spanned the globe.

To the neighbor’s on 119th Street, old blue-eyes was a lively and steely Bridge player. To any of his children’s girl friends that crossed his threshold, he was Mr. Affirmation and would call out, ‘Hello, my dazzling darling!’ To a widow from church, Don was the head of the family that adopted her as the family grandma. To any stranger, he was the father figure who welcomed them in for a meal.

All his grandchildren called him Bapa and he loved them to pieces. One year at Christmas, one of the nine grandchildren accidentally knocked over the Christmas tree. Bapa was cool and collected and assured this child that all was well – it was just a fake tree. Then, as Bapa tried to right the tree, he snapped it in two. It was laughter that followed and a fun memory was created. Don knew how to handle adversity, not sweat the small stuff, and laugh at the inconveniences of life.
Don attended countless sporting games, art shows, theater performances, birthday dates and graduations. He was a regular on the bleachers, or carrying those Costco lawn chairs when needed. He adored his role of Bapa. And when the call for help came, Don invited his daughter Jody and her five children to live with them for a time. Don did his best to be a loving father to the ones who lived with him.

During this period, one of the grandkids came home from school and taught Bapa a card game he had learned called Kings. Don loved it. Sometimes when the boys came home from school, Bapa would be there with the table set, cards dealt, score pad at the ready. And he always seemed to win.
As for cards, Don was a shark. No one could best him at Hearts. He had a knack for running the table and ‘gifting’ players with 26 points. Don not only loved games, but puzzles as well, even if they were 1,000 pieces.

And before his Alzheimer’s, Don could recite each address and phone number by heart from every place he had ever lived.

After retiring from TLA in 1994, Don’s next adventure was where he poured his soul. He went to work for Colonial Presbyterian Church’s foundation, where he had been a member since 1973. Don knew that there was one thing in life more important than even family, and that was knowing Jesus Christ. Don invested in many areas of Colonial. He led a Crown Ministries class. He worked the welcome desk. He was part of the Koinonia group and the Prime Timers Sunday school class. He was even a Monday morning offering counter. Don showed the light of Christ to all he encountered.
Don also loved the simple things in life. An onion sandwich. One Michelob or Samuel Adams a day. Reading the Kansas City Star or Tom Clancy novels. Traveling to Hawaii with Ted and Linda. Lounging in Florida or on a Royal Caribbean cruise. Baking delicious peasant bread. Going golfing with buddies, or driving ranges with grandchildren.

In the end, Don was more than just a husband, a veteran, an executive, a Daddy, a Bapa. He was our everything.

The family is forever grateful to our heroes of Kansas Palliative & Hospice Care who gave Don dignity and comfort for his journey home.