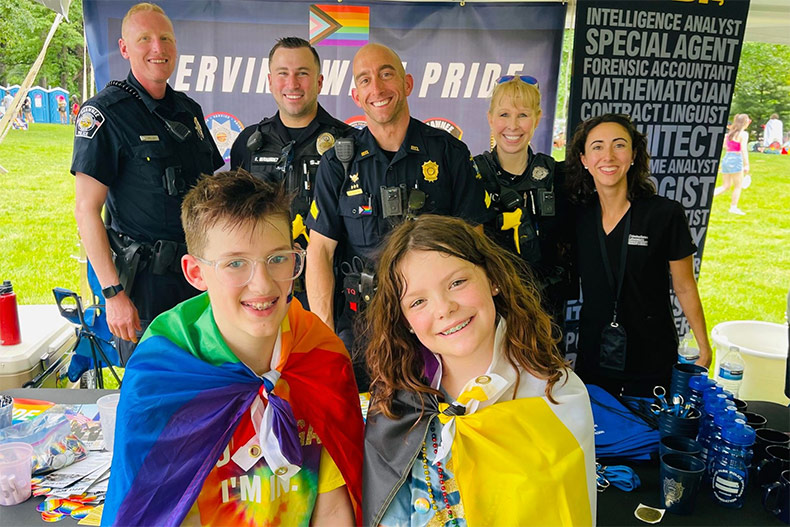 This story has been updated to make it clear that a social media post opposing the Shawnee PD’s attendance at KC PrideFest tagged Councilmember Jacklynn Walters and was not written by Walters herself.

A Facebook post and photo of Shawnee police officers at KC PrideFest this past June sparked a back-and-forth between some city councilmembers and the city manager’s office, with one councilmember saying the post was bad “optics” and should be removed.

At the time, now-former city manager Nolan Sunderman cautioned councilmembers against encouraging actions that could be construed as censorship or in violation of federal anti-discrimination law.

He also suggested that councilmembers’ stances on LGBTQ issues had already driven out some city staffers and could make it harder to recruit people to work for the city in the future. Shawnee PD had decided to attend PrideFest along with several other local law enforcement agencies as part of a recruiting push in the midst of an ongoing staffing shortage.

“We do have staff and/or their family members that identify as LGBTQ within our organization, including public safety,” Sunderman wrote in an email to councilmembers obtained by the Post through an open records request. “As you know, we have had members of our leadership team exit the organization because of the perceived discrimination and positions the council has taken.”

In the months since, LGBTQ issues have continued to crop up at Shawnee City Hall, with another councilmember telling Sunderman the city should avoid advertising in a local publication geared towards the gay community.

In October, the city council also voted to formally adopt a position in support of legislation in Topeka banning transgender athletes from participating in girls’ and women’s sports.

How we came to this story

The Post filed an open records request with the city last month after a tip from a reader suggested some councilmembers had opposed the police department’s participation in the Pride event this summer.

This story is based on emails between councilmembers and Sunderman that were obtained through that open records request, as well as more recent interviews with three councilmembers who maintain that KC PrideFest was too political an event for the police department to be involved.

Sunderman formally stepped down as city manager in November and did not respond to a request for comment for this story.

It pictures at least four police officers and two children standing at a booth at PrideFest in Kansas City, Mo., an event put on each year by the KC Pride Community Alliance.

The post’s caption reads: “We’ve had a great time at pride this weekend. We will be there until 5 p.m. today. Stop by and see us! #kcpridefest”

Shawnee was there as part of a joint recruiting effort that also included the Johnson County Sheriff’s Office and police departments from Leawood, Lenexa, Overland Park and St. Joseph, Mo.

It was the first year that Shawnee attended the event, Chief Sam Larson said recently in an email.

“Members of our recruiting team thought it may be a good event to reach qualified applicants for our agency,” he wrote.

At the time, the city had 13 openings for police officers and finding new candidates had been difficult for law enforcement agencies across the board, he said.

“We continuously look for events to market our police agency,” he said in the email. “This includes community events, colleges, recruiting fairs and military bases to name a few.”

The department has hired seven new officers since June but still has eleven openings, Larson said.

It is not unusual to see law enforcement do recruiting events at KC PrideFest, said Tony Medina, board secretary of the KC Pride Community Alliance.

Besides the Johnson County law enforcement agencies, there were also groups there from the Kansas City, Kan., Fraternal Order of Police, the FBI and the Kansas City, Mo., Fire Department, he said.

‘The optics are bad’

Some showed support for the department: “Good for Shawnee [PD]! Thank you for supporting ALL your citizens,” commented one person.

But many others were critical, with references to “sin,” “degeneracy” and “groomers.”

“[C]hildren don’t need to celebrate sexual preferences at a festive event and with adults. Period,” wrote one person .

Eventually, similar comments began showing up in the inboxes of city officials.

Mayor Michelle Distler said she received one such email, which she passed along to the city manager so staff would not be blindsided if it came up later.

Jenkins asked for more information about the event but did not comment further by email in the records obtained by the Post.

Knappen and Walters expressed reservations, saying the city should steer clear of issues that might be divisive.

“I would think our safety officers should stay out of politics and doubt that you will be posting, for example, at a ‘Value Them Both’ get together,” he wrote, a reference to a proposed amendment on abortion that was rejected by Kansas voters this summer.

Walters went farther, after she was tagged by someone else in a social media post which read, “If you are outraged about this and other post that shows our Shawnee police department advocating for pedophile. Please contact our city councilwoman.” The message was followed by Walters’ contact information.

The post was forwarded in an email as part of the record’s obtained by the Post but the sender’s name was redacted.

In ensuing emails to Sunderman, Walters asked whether the officers were paid for their time — they were — and said the use of tax dollars would only “fuel the fire” with constituents.

“I’m going to be straight forward and request on behalf of the many constituents that have reached out to me to please take down the posts,” she wrote.

“The optics are bad,” she wrote.

The Pride festival was not the only LGBTQ issue that prompted queries to Sunderman in recent months.

In October, shortly before the council’s vote on the trans sports item, Councilmember Tony Gillette wrote Sunderman an email asking where the city advertises and attached a letter seeking the city’s ads in Pridely, an LGBTQ event guide and business directory.

“I hope Shawnee has NO plans to participate in this process or request! Please confirm,” Gillette wrote.

Sunderman replied that the city did not plan to advertise in Pridely but added a few words of caution about potential discrimination claims that could result from perceived discrimination based on gender identity or sexual preference.

The council was putting Sunderman and staff who are seeking to hire from a diverse field in a “challenging spot,” he said.

Such a position could make it difficult for any future city manager, he added. At that point, Sunderman had already announced his intention to resign, a move which became effective Nov. 1.

“Again, I know the view of the Council and that is what I have attempted to thread, but I would suggest to make them aware upfront to avoid future conflict as it could likely be a key objective for them without knowing the Council’s opposing view,” he wrote.

Reached by phone recently, the three councilmembers who emailed about either the PrideFest event or potentially advertising in Pridely explained their stance on the issues.

Walters said she is still comfortable with her request to take the Facebook post down. She and Knappen each said they thought a police presence at PrideFest engendered divisiveness among constituents.

“On a controversial issue, especially a social issue that doesn’t unite the city, let’s just not broadcast it,” Walters said. “Let’s be wise and discerning.”

She added later, “I value each and every individual despite whatever differences we may have.”

Knappen took a similar tack, suggesting there’s a different expectation of a police or city service department from a governing body when it comes to political statements.

“I don’t think they should be used as props at events such as that and that’s where I was coming from,” he said of the police PrideFest appearance.

Neither Knappen nor Walters would say whether the police department should not participate in future Pride events as a recruiting effort.

“I’d have to think about that,” Knappen said.

Walters said police recruitment was “not my expertise,” and said she was simply representing the wishes of her Ward 4 constituents.

Both, however, hinted that they were unhappy at having to vote on the transgender sports ban issue.

Knappen said he had to vote his views, but “I don’t think those types of topics should have been included at the city level.”

Gillette, for his part, said he felt it would be wrong for the city to be “picking sides” in its outreach to various groups, be they LGBTQ or conservative Christian.

He said it’s fine if an LGBTQ person is hired on the police force, and the city shouldn’t discriminate, he said.

“But we don’t have to go out of the way to attract certain types of individuals,” he said.

Jae Moyer, an LGBTQ advocate from Shawnee, is skeptical of the councilmembers’ claims of wanting to avoid divisive issues.

Their comments vilify certain people when councilmembers are elected to serve everyone, they said.

“The type of rhetoric and conversations between members of the city council are the same hateful fuel we see powering violent acts against the LGBTQ+ community, and that should concern all residents of Shawnee, and of Johnson County,” said Moyer, in an emailed comment to the Post. “I believe this city council is trying to be intentionally divisive on LGBTQ+ issues, and it isn’t healthy for [Shawnee].”

“We acknowledge and support LGBTQIA+ persons, allies, and other organizations and their endeavors to cultivate change for more inclusive spaces. To those of the city of Shawnee and the KC metro as a whole, we see you, you are valid, you are loved.” wrote Margeaux Seymour, co-chair.