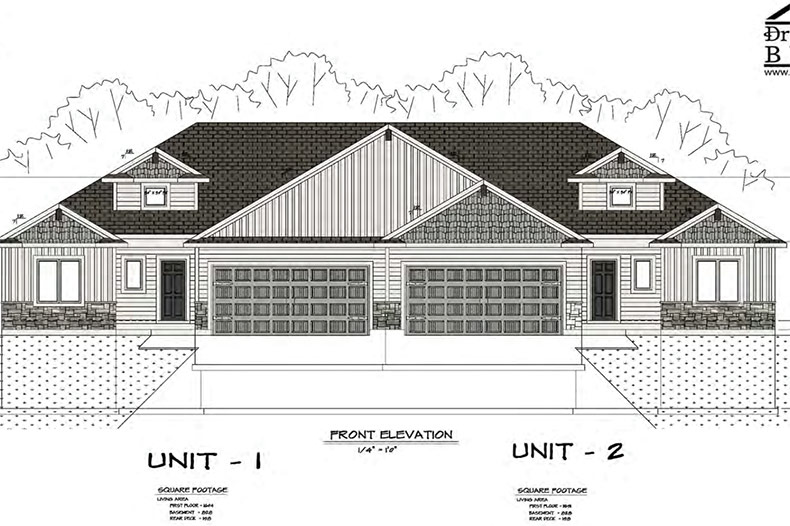 Design rendering of a duplex unit at Luxe Villas at the Green. Image via Shawnee Planning Commission.

A western Shawnee golf course and apartment development on Clear Creek Parkway has been reimagined, with fewer residential units on more land that will mean changes to the neighboring Shawnee Golf and Country Club course.

Catch up quick: Developer Kevin Stallings of Dreams & Design Building in Lee’s Summit, Mo., presented the Shawnee Planning Commission Monday with a significant revision for the third phase of a larger project that’s been in the works since 1999.

What’s new: The plan now reduces the number of units from the original 180 in two-story apartment buildings to 97 in duplexes and single units.

The project, dubbed Luxe Villas at the Greens, would be built in the 23600 to 23800 block of Clear Creek Parkway and will be marketed to seniors, Stallings said.

Zooming out: The Villas is part of a larger project that began with the course, the country club and 420 apartments, known as the Greens at Shawnee.

What else: The Villas will be significantly less dense than the original plan.

Discussion: The new plan did not face any objections from neighbors at a previous neighborhood meeting, the developer said.

Key quote: “They don’t want to live in an apartment or nursing home or assisted living,” he said. “They want to have their own place that’s maintenance provided and one-level living.”

A final thought: There was a sticking point with planning staff and the commission.

How they voted: Ultimately the commission voted 7-3 in favor of the rezoning and preliminary development plan, and the item goes to the City Council on Jan. 9.