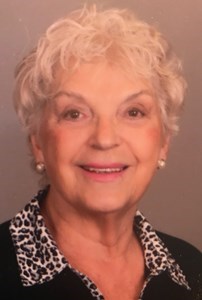 Having recently returned from a fabulous week-long Thanksgiving trip to Colorado to visit her daughter
and family, Elaine Malcolm passed away suddenly at her home on Tuesday, November 29th, 2022. She
was 83.

Alice Elaine (nèe Brown) Malcolm, (Elaine), of Prairie Village, Kansas, was born on November 16, 1939,
in Kansas City, MO to Roy and Mildred Brown. After spending her early years in Springfield, Missouri,
the family moved to Kansas City, where she graduated from Center High School. Elaine attended the
University of Missouri, where she was a member of Alpha Delta Pi sorority. She graduated from
Southeast Missouri State University.

She is survived by three children, Clinton Malcolm of Topeka, KS, Melinda (Mindy) Malcolm Neiblum
(Jeff) of Fort Collins, CO, and Elizabeth Anne Herbig (Chris) of Overland Park, KS and eight grandchildren,
(they called her Tutu), whose names we’ll list because, after all, who doesn’t like to find their name in a
Google search. They are listed by age, not importance, so as not to hurt any feelings: Blake Malcolm
(Jessi), Jordan Neiblum, Hunter Neiblum, Rachael Herbig, Caroline Herbig, Matthew Herbig, Cameron
Neiblum, and Rebecca Herbig. She also had three great-grandchildren, whose names may be being
published for the first time, and are, thus, “Googlable”: Forrest Denton, Russell Malcolm and Charlotte
Malcolm.

Elaine was blessed to have an extended nuclear family. After their divorce, Elaine and Allen Malcolm
remained friends and he, his wife, Carolyn Malcolm of Springfield, MO, and their children Brett Malcolm
(Julie), of Wildwood, MO and Mary Leslie Hashbarger (Mike), of Chesterfield, MO, along with their eight
children, (space and “per word” fees prohibit listing their names), all considered Elaine family and the
feeling was mutual.

Not to be overlooked are lifelong friends, (not to be all inclusive, but these are the ladies living in
Kansas City that were a big part of her life), Nancy Myers, Jennifer Turner, and Marcia Holland.
She lived, and raised her family in, Sikeston, MO from 1967-1983, at which time she moved to St. Louis,
MO. Subsequently, Elaine lived and worked in the Greater Washington, DC area, Springfield, MO and
the Kansas City area.

She spent most of her working career as a Legal Assistant. She worked in private practice; Federal
courts; and the US Attorney’s office. During her time in DC in the 90’s, she worked at the White House
Visitor’s Office. While there, she had the privilege, fun, and good fortune of attending White House
functions and providing tours to dignitaries and a few celebrities. Name drop: She provided a tour to
Tom Hanks and his family while he was filming Forrest Gump, but her all-time favorite was Esther
Williams, whom she idolized as a child.

After “retiring” in the mid-2000’s, Elaine embarked on a second career as a Sorority House Director, (in
lay terms, House Mom), back where it all started, at the University of Missouri and the Alpha Delta Pi
house. Along with her faithful and loving Cavalier King Charles Spaniel, Penny, this eventually took her
to the University of Kansas (ADPi), back to Mizzou, (Sigma Kappa), and finally to Missouri State
University, (Sigma Sigma Sigma). Her legacy may be that many young ladies learned the difference
between “upstairs and downstairs language” and that the salt and pepper shakers are always passed as
a pair.

Elaine was an active member of PEO and enjoyed getting together regularly with her Alpha Delta Pi
sorority sisters.

Elaine will be remembered for many things: she was kind, thoughtful, generous and loving. She had a
great sense of humor and she and her family laughed, a lot! She was witty and could find the humor in
the absurd. Her daughters called it “Sassy”. She loved, was loved, and will be missed. And when we
remember I’m sure that we will laugh, a lot!

Arrangements are incomplete at this time. In lieu of flowers or plants, donations can be made to the
Ronald McDonald House.