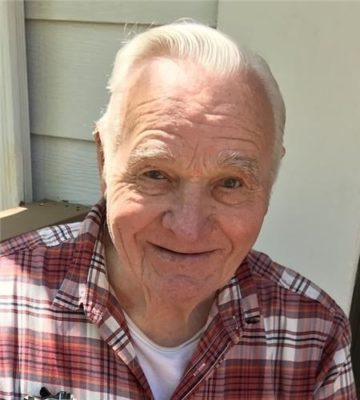 “What is a farmer? A man out-standing in his field.”

Dave Friederichs. Everyone knows him, and if you don’t, you would soon because whenever knew a stranger. His big smile and piercing blue eyes (with a bit of ornery in them) were ready with a witty comment or joke for you. He shared so many wonderfuland fun adventures with several friends and family throughout his long life in the Quad Cities, and then he gained a new group of friends and family over the last 8 years living in Kansas City. You could see how much everyone enjoyed him with their enduring names for him like Gentle Giant, Papa, Grampa and PopPop.

David “Dave” Russel Friederichs passed away peacefully on November 28, 2022, with family by his side after 91 years of a beautiful life. He was born August 19th, 1931, on the family farm in Dixon, Iowa, to Gustav Friederichs, Jr., and Isabel Schult Friederichs. He graduated from Davenport High School (and loved going to his high school reunions) and served in the Navy during the Korean War. He worked hard for several years as a farmer on his family’s farm, and a carpenter where he built 69 houses over his life, the last one in Long Grove, Iowa, at the age of 75. He was also well-known for being the Weed Commissioner of Scott County where he would drive around with a growing weed in the back of his truck. After spending most of his life in the Quad Cities, he moved to Kansas City 8 years ago to be closer to his loving daughter, caring son-in-law, and beautiful granddaughters.

Dave had a way about him, patient, and calm, always happy, enjoying every little moment of life. He loved a good parade (especially driving his Model T and shooting off the cannon), selling sweet corn, going to the fair, working on the family farm, speaking German, socializing with buddies, and telling jokes, but he loved nothing as much as being a dad to Christy (his “smucke deern”) and grandpa to his Harper “Ferry” and Avery Isabel (“she’s just like my Mama” he would say). He would light up anytime he was with any of his girls.

Please bring memories to share at one of Dave’s celebrations of life on Saturday, April 15 th , 2023, at the Dixon Legion in Dixon, Iowa or in Kansas City this spring. (Further details to be announced.)

In lieu of flowers, memorials may be made to the Dixon Legion (604 Davenport St, Dixon, IA 52745) where Dave was a member for over 65 years, or to the family who is starting a fund to help support families caring for a loved one with dementia (6315 West 67 Terrace – Overland Park. KS 66204).