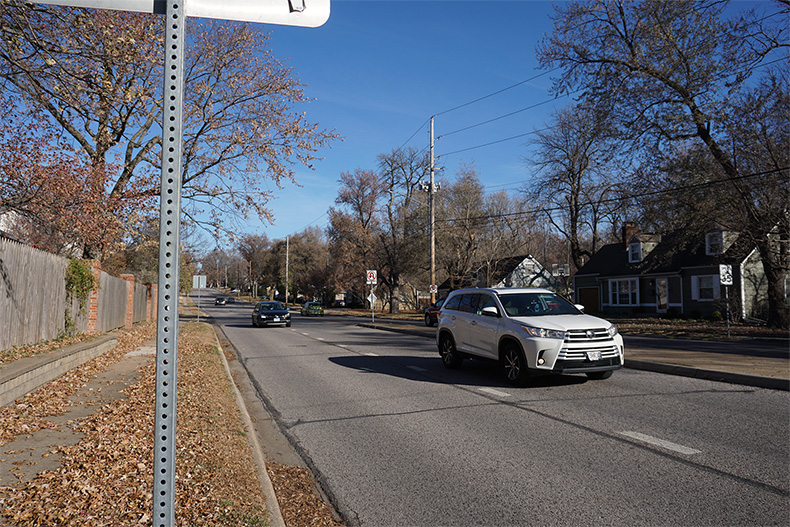 The Overland City Council unanimously approved an interlocal agreement Monday with the city of Prairie Village to reduce lanes and make other improvements to Nall Avenue from 67th to 75th streets. Photo credit Nikki Lansford.

Major changes are coming to a stretch of Nall Avenue in Overland Park and Prairie Village.

Why it matters: An interlocal agreement between the two cities clears the way for a major reconstruction of Nall between 67th and 75th streets, with the aim of making the busy thoroughfare more bike and pedestrian friendly.

Driving the news: The Overland Park City Council on Monday unanimously approved its end of the agreement, which sets parameters for the project’s administration and funding responsibilities for each city for the project’s overall $2.8 million price tag.

The details: Once completed, the improvements will reduce the number of lanes on that eight-block stretch of Nall from four lanes down to three, with a dedicated center turn lane for turning and bicycle lanes on the sides.

Key quote: “I’m glad to see this project going forward,” Councilmember Melissa Cheatham said at the city’s public works meeting Monday. “This is what I think would be considered a road diet … so I think this will be a good project in a part of town I use often.”

What’s next in the Nall Avenue improvement process?

Now that the project has received approval from the city council, design for the rode improvements will begin in early 2023.