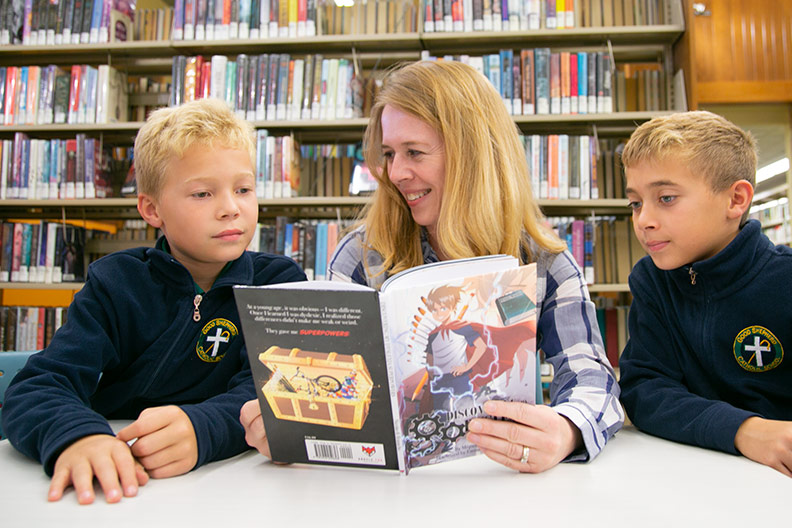 Megan Nicolas recently published a children's graphic novel aimed at portraying the positive things that can come with dyslexia. The idea came to her and her twin sons, Xavier (left) and Luca (right) after they couldn't find books about dyslexia with a positive bent at Corinth Library in Prairie Village. Photo credit Juliana Garcia

Last spring, on a trip to the Johnson County Library’s Corinth branch in Prairie Village, Megan Nicolas and her twin sons Luca and Xavier noticed a lack of books that portrayed dyslexia positively. So they decided to write their own children’s graphic novel to fill that gap.

The upshot: Nicolas of Overland Park wrote “Discovering My Dyslexia Superpowers” because the only dyslexia-related book at the library talked about the struggles and challenges that come with being dyslexic.

Background: The story is loosely based on her son Luca’s journey with dyslexia, which he was diagnosed with at age 6.

What they’re saying: Nicolas said the purpose of “Discovering My Dyslexia Superpowers” is to encourage children with dyslexia to know it isn’t all about struggles and challenges.

Key quote: “There are a lot of strengths, just like all of us we have strengths in some areas and weaknesses — it’s kind of like that,” Nicolas said. “It should be something that’s normalized, that we kind of value each other’s strengths. They say one in five children have dyslexia, and I think for some reason there’s not as much awareness and advocacy about it.”

How to get the book

“Discovering My Dyslexia Superpowers,” which is written by Nichols and illustrated by Emmanuel Ifeanacho, is available to purchase in hardcover or paperback on Amazon.