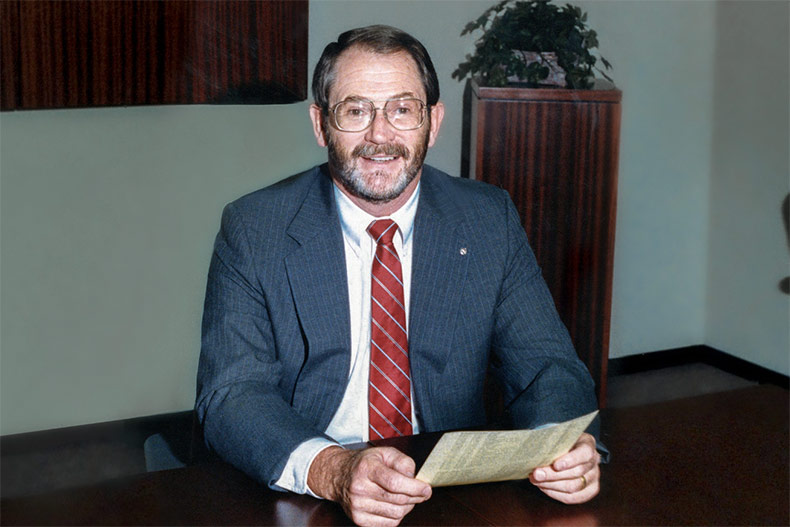 "Wayne’s life was a blessing as he positively impacted the lives of countless people during his time on this earth, and his passionate commitment to community improvement projects will benefit many generations to come." Image via city of Overland Park Facebook page.

On December 2, 1941, Dorothy and Charles Byrd welcomed their first child, Wayne Cornelius Byrd, into the world. Wayne and his siblings, Wanda and Bryan, were raised in southeast Washington, D.C. During his growing up years in the D.C. area, Wayne developed a strong commitment to family, his faith and service to his community.

After graduating from Anacostia High School, Wayne worked his way through the University of Maryland with a variety of occupations including a stint as a night shift manager in an ice cream factory; program planning for a defense contractor; and a range of tasks with CBS News-film. He had shown an early taste for politics when he successfully ran for student council in eighth grade, but his appetite was really whetted when he traveled with CBS News during the 1960 presidential campaign.

Marriage and the birth of his first son, David, demanded a more solid income. Subsequent jobs took him to a Federal Government GSA position and a move to San Francisco. He later joined the sales team at Xerox. Following the addition of son Michael in 1970, a job with Crown Zellerbach took the family to the Kansas City area. He and a partner soon formed a plastic packaging company that grew into a sizable organization.

In 1979, Wayne struck out on his own to form Packaging Systems, which he operated into the mid-1990s. He described the size of Packaging Systems as “6’4” and 220 pounds.” That was also the year he and Anne first met. A year later they were married and found great joy in their newly blended family of three sons, David, Michael and John.

Shortly after the move to Kansas City, Wayne and his family joined Leawood United Methodist Church. Over the past 50+ years he held numerous lay leader positions plus sang in the choir; was a faithful participant in the Seekers Sunday School class; encouraged many church members to take the Walk to Emmaus; served as a mentor for confirmands; participated in mission trips; and was a model for warmly welcoming visitors.

The flexibility of Packaging Systems afforded him the time to pursue another passion – serving his community. As an Overland Park city councilmember for 16 years, he focused his energies on ensuring the city grew in intelligent, cost-effective, and sustainable ways. He was especially active in the Overland Park Rotary Club and in the initiation of the City’s recycling programs. Perhaps his biggest contribution to Overland Park was his role in the Overland Park Arboretum and Botanical Gardens. The original piece of land was identified and purchased while Wayne was on the Council. Subsequently he was the founding president of the Arts and Recreation Foundation of Overland Park. ARFOP raises funds for the Arboretum as well as the Deanna Rose Children’s Farmstead and the Public Art Master Plan.

Wayne was an avid bicyclist who fostered a love of cycling within his extended family. He participated in Biking Across Kansas for 35 years. He instigated multiple family touring trips in many states and enjoyed several cycling tours in Europe. Wayne had an incredible gift for generating big ideas and then working to bring them to fruition. Wayne blended his love for community development and bicycling through the development of the Bicycle Friendly Community Program, which is administered by the League of American Bicyclists. Nearly 500 cities are now certified as Bicycle Friendly.

Wayne’s life was a blessing as he positively impacted the lives of countless people during his time on this earth, and his passionate commitment to community improvement projects will benefit many generations to come. Wayne will be greatly missed by his family, who is comforted by the fact that his legacy will live on in the many ways he changed the world. Through his faith and actions, Wayne consciously set an example every day on how to treat other people and what a person might hope to achieve during his or her lifetime.

Wayne passed away at home on October 16, 2022, and is preceded in death by his parents, Charles A. Byrd and Dorothy J (Smith) Byrd, and niece, Meredith F. Johansen.

Fond memories and expressions of sympathy may be shared at www.mcgilleyhoge.com for the Byrd family.