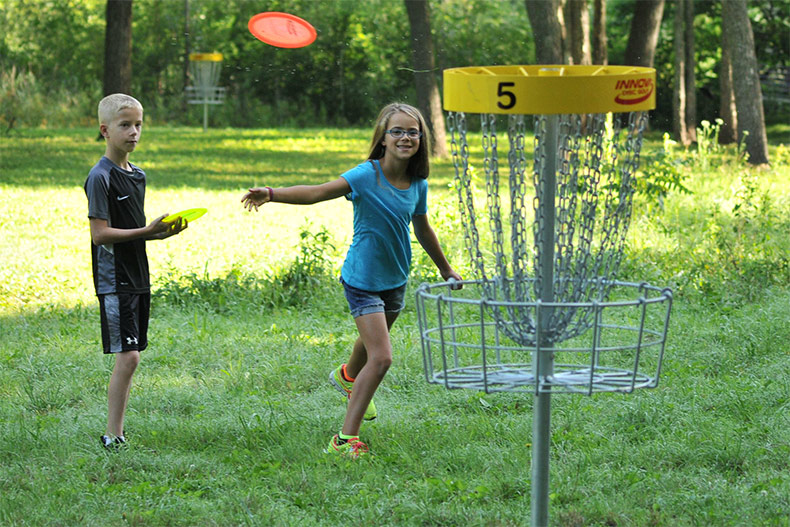 With the sport growing in popularity, Lenexa hopes to build a new disc golf course at Black Hoof Park in time for a tournament already scheduled for next spring. Above, two young players at an already existing disc golf course at Lenexa's Sar-Ko-Par Trails Park. Image courtesy city of Lenexa.

Pickleball, move over. There’s a new contender for fastest growing sport that may soon dominate local park and recreation programs in Johnson County.

Disc golf baskets have been popping up everywhere: Johnson County Park and Recreation District has three, Sar-Ko-Par Trails Park in Lenexa has one and more can be found in Olathe and Prairie Village.

The upshot: Now Lenexa is building another disc golf course at the city’s Black Hoof Park that backers say could become a premier venue for tournaments and super fans.

Driving the news: Concrete has yet to be poured for tee pads at the park, and the parking lot will need to be expanded. But as the city council was getting ready to approve a donation agreement from private disc golf enthusiasts Tuesday, they were told that the first tournament there is planned for April 1, 2023, shortly after the ribbon cutting at a date-to-be-determined in March.

Key quote: “This course is going to be one of the top courses in the region,” he said Tuesday. “It’s going to draw people to come to Lenexa, hopefully to spend money but also to enjoy Black Hoof Park.”

What else: Besides the engineering company and the association, donations also will come from individuals Kevin Lewis and Jason Wollum, also of Henderson Engineering.

Final thought: Disc golf has seen explosive growth in the past year, after it became popular in 2020 as people sought outdoor sports during the height of the pandemic.