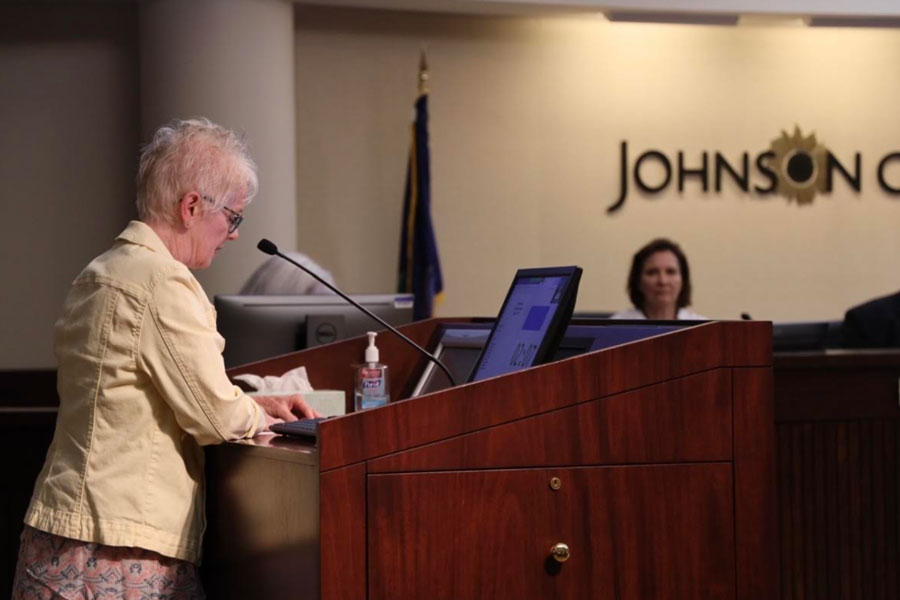 At a public hearing on Monday, Johnson County residents weighed in on the $1.64 billion county budget for 2023. Above, Olathe resident Mary Blake addresses the board. Photo by Lucie Krisman.

Johnson County’s proposed budget for next year looks to generate more revenue from property taxes than it has this year, sparking pushback from property owners who say they’re being priced out of the county.

Following a public hearing on Monday night, the Johnson County Board of County Commissioners approved a resolution allowing property tax rates for Johnson County to exceed the state-mandated revenue neutral rate in next year’s budget.

Why it matters: Exceeding the revenue neutral rate will allow the county to take in more property tax revenue than it did in 2022.

What do “mills” actually mean?
• One mill is equivalent to $1 for every $1,000 of assessed property value.
• Assessed property values are 11.5% of appraised, or market, values for residential properties. (So, a home appraised at $300,000 has an assessed value of $34,500.)
• So, divide your home’s assessed value by $1,000 and multiply that by a taxing jurisdiction’s mill rate to figure out how much in annual property taxes you will owe for that jurisdiction’s share of your annual tax bill.

Other budget takeaways: The $1.64 billion budget is for all county services and includes a $264.1 million Capital Improvement Program — which encompasses the county’s building and maintenance costs for the upcoming year.

Johnson Countians weigh in: At Monday’s public hearing, several Johnson County residents voiced concerns about the rise in property tax revenue in the budget, arguing that residents are getting priced out of Johnson County and are already struggling due to recent inflation.

Board action: After closing the public hearing, the board ultimately approved all three measures (for each taxing jurisdiction) on a 5-2 vote, with commissioners Charlotte O’Hara and Michael Ashcraft voting in dissent.

What’s next? Following Monday’s approval, the budget will come before the board for final approval Sept. 1.