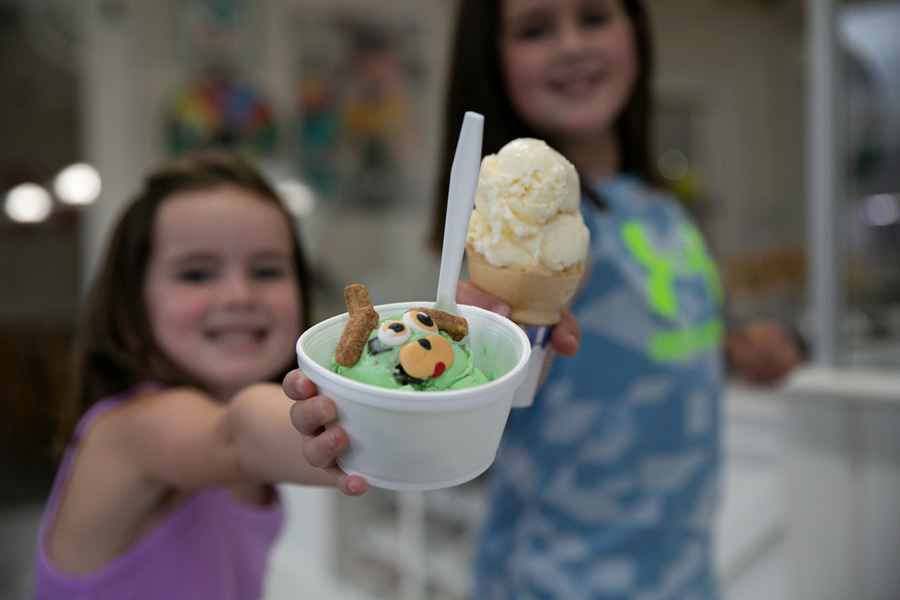 Unusual, yes, but the sugary cloud was so good it took a prize at the 2020 Blue Ribbon Bacon Festival in Des Moines, Iowa, said JoAnn Romano, co-owner of a Johnson County shop that now features not only organic cotton candy, but ice cream treats, homemade fudge and cannolis.

• The owners started business in 2020 with a sweets shop storefront on Main Street in Spring Hill.

• Their specialities include organic bacon cotton candy and cannolis made with cheese shipped from New York.

After success with Pop’s Sweet Shop in Spring Hill, the Romanos, of Olathe, have branched out to a second location, this time in Old Town Lenexa.

Pop’s Ice Cream Parlor, 13446 Santa Fe Trail Drive, has been busy since opening July 29 in the corner space that for three decades had been occupied by Old Town Hair and Nail Salon and was a bank before that.

In fact, the couple salvaged some mirrors from the salon and a light fixture on site to keep a little history in the building.

How they got started

It all started with the cotton candy and Dale Romano’s effort to find another line of work after retiring from a construction job, JoAnn said.

After their win at the Iowa bacon festival, the couple made plans to take their organic cotton candy flavors on the road to other fairs and festivals that year. Then, the COVID-19 pandemic shut them down.

But when some retail space became available on Main Street in Spring Hill, the Romanos decided to go into business there with an expanded menu.

They contracted with famous Texas brand Blue Bell Creameries to supply the ice cream for their 22 varieties of shakes, malts, sundaes and other ice cream treats.

Despite cold weather when they opened in November 2020, JoAnn said the tiny 350-square-foot store saw long lines and immediate success in a Spring Hill downtown that is beginning to see a return of business in its storefronts.

“The community was so starved for socialization (during the pandemic) and ice cream by nature is social,” she said. That, along with the nostalgia for a Main Street ice cream parlor contributed to its popularity, she added.

Since then, the shop has expanded in Spring Hill with counters where customers can watch fudge and other goodies being made.

The Romanos decided to open their Lenexa shop after learning that many of the customers they were getting in Spring Hill were driving down from Shawnee and Lenexa, she said.

JoAnn credits the shop’s unique offerings as a big part of the draw.

“Being a Greek-Italian girl from Queens, New York, cannolis are a part of my family heritage and history,” she said.

Both shops offer cannolis, with cheese imported from New York, as well as the city’s staple black-and-white cookies shipped from New Jersey.

The store also has twelve flavors of organic cotton candy. (Bacon is a seasonal offering.) Besides using organic sugar, she said the candy does not include dyes and artificial flavoring in its ingredient list.

She describes the shop as a “dessert diner,” with a friendly down-home vibe.

“It’s the best place in the world to work because I get to hear about everybody’s gold star, every dance recital that went well. That’s what people do – they go for ice cream,” she said.