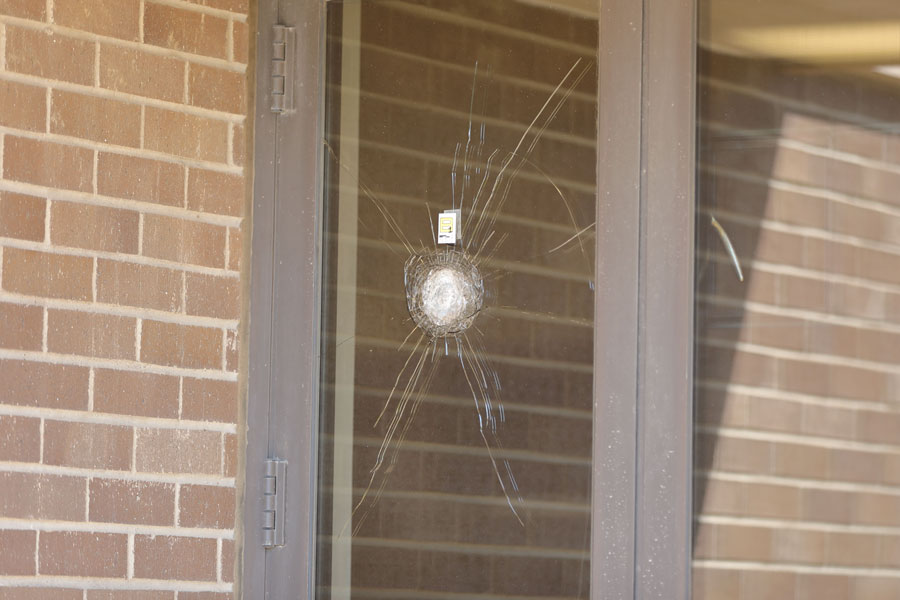 Shawnee Police are investigating after gunshots were fired in at least two places along Johnson Drive overnight Friday.

At least two bullets appear to have struck Shawnee City Hall during the incidents, damaging a door and window on the front side of the building which faces Johnson Drive.

Investigators say city hall was unoccupied at the time the shots were fired, and nobody was reported injured in either shooting incident.

In a news release, Major Jim Baker says officers were called to the 13400 block of Johnson Drive, about 1.5 miles west of city hall, at about 1 a.m. Friday to check on reports of possible gunshots heard in the area.

“Officers discovered shell casings in a driveway and apparent bullet holes in a house,” Baker said in the release. “No one was injured.”

The damage to the building was found by city staff as they arrived for the work on Friday morning.

The glass in a city hall front door was shattered, and a window just east of the doors was also damaged by gunfire.

“There is no known correlation between the two locations that were damaged, and the motivation behind the incidents is unknown,” Baker said. “Shawnee Police detectives are investigating both incidents with assistance from the Johnson County Sheriff’s Department Crime Scene Investigation Unit, who are processing the scenes for evidence.”