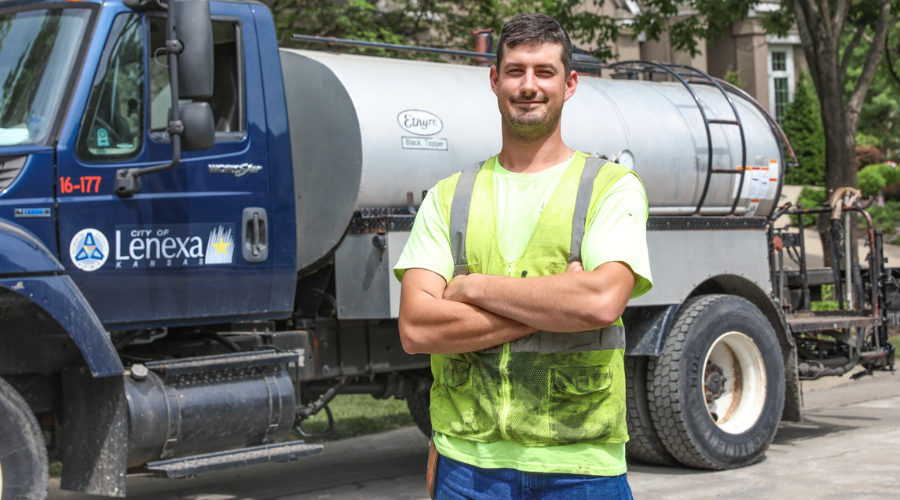 Alec Brown started working for the City of Lenexa Municipal Services Department in 2015 as a street maintenance worker.

He always knew he wanted to be a dad; he just didn’t anticipate the long journey of in vitro fertilization.

“Being a parent is so much more fun than anyone has ever described,” he said. “It’s fun to see how every day she gets a little better at something or learns something new or makes a new facial expression.”

Holding Camille brings the Brown family a lot of joy, but the road to getting pregnant through IVF was tough.

“IVF is a very long road that doesn’t yield a lot of joyful experiences,” Alec said. “It’s filled with appointments, conversations with doctors and some very uncomfortable and physically painful events. The process is long and full of science and unnatural things, but in the end, when everything works out, you get the greatest gift of all. For us, that was our beautiful baby girl Cami.”

Family relationships are top priority for Alec. He strives to be more like his own father, not just as a parent but in his work ethic too.

“My dad is one of the hardest working, selfless, and caring people I know and those are attributes that I hope to be myself,” he said.

Alec grew up in Shawnee, Kansas, with his dad who was a Lenexa police officer for 30 years, his mom and two siblings.

“My mom and dad have always been very hard-working people,” he said. “They expressed how important work is and that’s why I’ve been working since I was young.”

From loading bags of mulch, working at a local BBQ joint and doing landscaping, Alec started working at the age of 14.

“I learned the value of the dollar by earning through work,” he said. “It also exposed me to the reality of the “work” side of life that many other kids at the time didn’t experience.”

A family farm in Iowa was a place Alec remembered visiting over summer breaks where he created many fun memories as a kid. When he graduated from high school in 2013, he sought the farm life.

“I went there, Johnson County guy, not knowing anything about farming and just kind of got thrown into it.”

Working on the farm meant long hours and intensive labor.

“Farming is literally sunup to sundown every day of the week, Monday through Sunday,” Alec said.

While he didn’t necessarily like working seven days a week, being on the farm introduced Alec to heavy machinery.

“Going to the farm sparked my interest in equipment and the big toys,” Alec said. “I mean tractors and harrows — it’s just exciting to drive such a big piece of equipment that could create really a lot of destruction if you mishandled it.”

When Alec decided to move back to Kansas City to reunite with his then-girlfriend, Brittany, in 2015, he had an idea of the career path he wanted to take.

“I knew I wanted to do something with equipment,” he said. “My dad had worked for the municipal services department for a season a long time ago. He told me to look into it.”

“It’s been great that I’ve been able to work hard and show that I care about this place and that I’m dedicated — they have rewarded me for that by promoting me even a little ahead of schedule. Now I’m able to bring home a little more money and have more responsibility. I appreciate all of that.”

Unlike working on the farm, the schedule is predictable for City staff.

“It’s a great schedule because you know you’re going to be getting off at a certain time every single day,” he said. “On the rare occasions, emergencies happen, or a tree goes down and people get called in after hours. Plus, we have weekends off.”

From cutting and preparing road surfaces for repairing potholes to using a variety of small and large tools to operate a variety of heavy-duty road maintenance and construction equipment with attachments, Alec supervises a crew of three to five staff members.

“We’re responsible for the taxpayers’ dollars and we’re not wasting that,” he said.

When it snows, Alec and the street maintenance workers switch to plowing mode.

“Most of the guys will love snow plowing just because it’s a whole different work atmosphere,” he said. “There are two shifts: midnight to noon and noon to midnight. You’re not with your usual daily crew — you get to work with a different group of people during those hours. Everybody usually gets there a little bit early, and we all have fun and talk and drink coffee and then it’s like, get your trucks and saddle up and go.”

The satisfaction of seeing streets cleared keeps them going.

“It’s instant gratification,” Alec said. “If you have a street that’s completely covered in snow, and you open it up so that cars can get through — that’s a pretty big deal.”

Beyond his usual workload, Alec has participated in several City committees like the safety committee and the municipal services performance management committees.

Most recently, he was involved in the Lenexa Leadership Foundations Academy — a partnership between the City of Lenexa Human Resources Department and Park University -Lenexa City Center Campus — where he and 13 other staff members from across various City departments, studied Lenexa-specific policies and practices and leadership soft skills over six months.

It’s the people he works alongside each day and the team camaraderie that brings more fulfillment out of his job.

“Joy comes from the guys that I work with,” Alec said. “We all care about each other and watch each other’s backs and it’s kind of like a big group of brothers. We’re involved in each other’s lives, and we like to you know what’s going on.”

Alec lives in Spring Hill, Kansas, with his wife and daughter. Alec enjoys spending his free time with his family (especially swimming in the summer), remodeling his house and fishing.