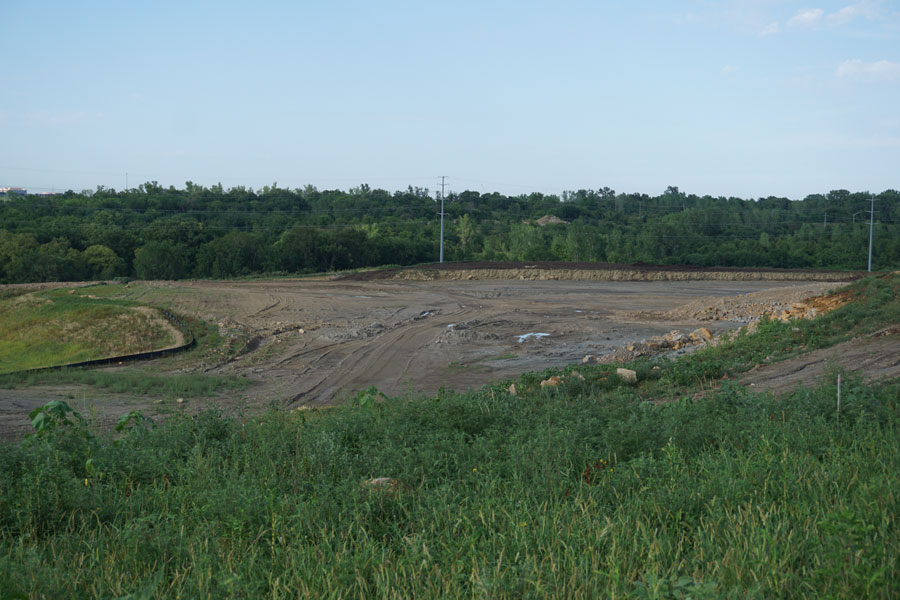 Developers have proposed a three-phase quarrying project at the site, above, of the former Holland mine off K-10 and Renner Boulevard that could take up to seven years but would aim to stabilize the mined-out ground underneath for future development. Photo credit Nikki Lansford.

Correction: This site is off Renner Boulevard and K-10. An earlier version of this story’s headline mistakenly said K-7.

A plan to mine the area near Renner Boulevard and Kansas Highway 10 for the better part of the next seven years is being considered by Lenexa planners as a way of reclaiming land above the defunct and deteriorating Holland mine for eventual development.

Driving the news: The Lenexa Planning Commission gave unanimous approval Monday to a special use permit and preliminary plan that would allow a limestone mining and quarry operation for five years on 80 acres on the southwest corner of that intersection.

The upshot: The surrounding area is at the edge of Lenexa’s boundary and is mostly industrial, but a multi-family residential development, yet to be built, is immediately to the southwest in Olathe.

Three phases planned: Resuming quarry operations there would mean blasting, rock-crushing and hauling could begin once the site is ready. Mine officials have proposed the quarry operate in three phases:

More details: The operation has the potential for environmental impacts including noise, dust, light, vibrations from blasting and stormwater runoff. To mitigate those, the developer also has agreed to some rules for operations.

Zooming out: Mining in the area goes back about four decades.

Bigger picture: Planning commissioners were told Monday that the Holland mine operators likely dug too far into the floor, causing the pillars to become unstable and in some cases, collapse. As a result the surface has never been developed.