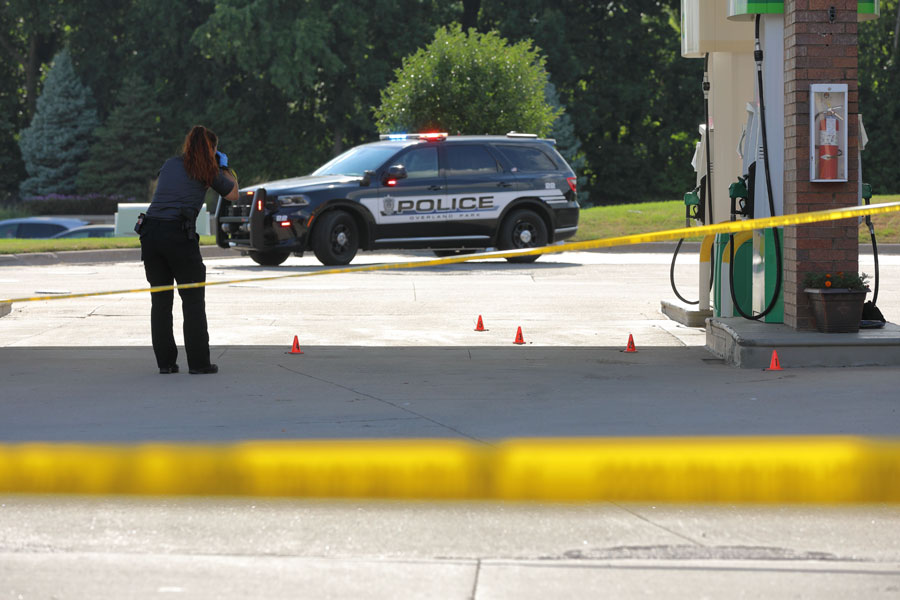 An investigator on the scene Sunday of a shooting at a BP gas station at College Boulevard and Antioch Road. Photo credit Mike Frizzell.

Investigators have identified the man killed Sunday in a shooting at an Overland Park gas station as Shaquille Jackson, 26, of Kansas City, Missouri.

Overland Park Police say a man was shot and killed late Sunday afternoon at a gas station near College Boulevard and Antioch Road.

Police say they were called to the BP gas station at 8698 College Boulevard for a man who had been shot near the pumps.

Arriving officers confirmed that the scene was safe for Overland Park Fire and Johnson County Med-Act paramedics to enter.

The victim was transported by ambulance to the Overland Park Regional Medical Center in critical condition and was later pronounced dead.

Sutterby says one of the suspect vehicles is a Toyota Highlander, and the other is a Chevrolet Cruze.

Both vehicles left westbound on College Boulevard. Surveillance cameras at the gas station captured most of the incident, and detectives are reviewing the footage.

Police say they’re working to determine how the two vehicles are connected.

Sutterby says there was only one shooter involved. The victim and shooter have both only been identified as males.

“We’re looking for multiple people who may have information, were a witness, or in the area around the time,” Sutterby said.