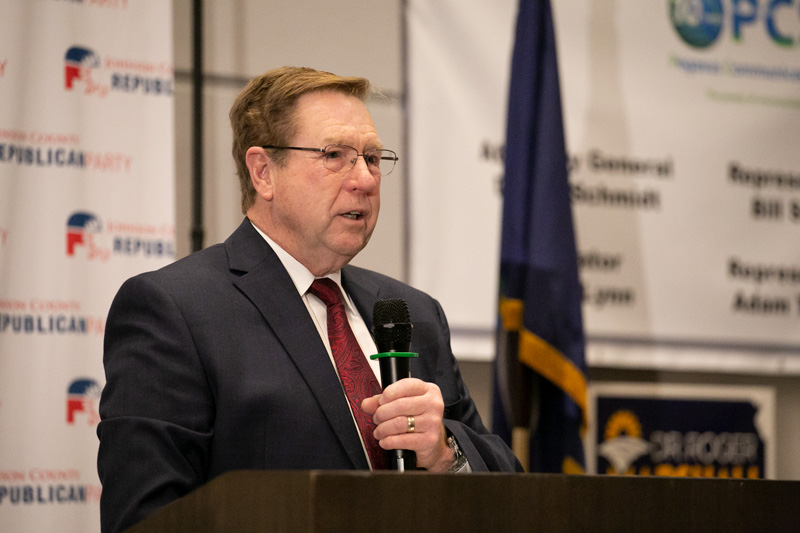 The Johnson County Sheriff’s Office has said that since last fall it has received more than 200 tips from people claiming they were victims of or witnesses to fraudulent activity in local elections.

Yet the office has produced only one offense report related to any alleged violations of Kansas election laws since 2020.

“It is the Sheriff’s Office’s statutory obligation to investigate any criminal claim that comes to our office and submit our findings to the District Attorney’s Office,” the Johnson County Sheriff’s Office said in a statement on July 19.

So far, the Johnson County District Attorney has received no cases from the sheriff.

“This office has not been involved in this investigation and nothing has been submitted to our office for review,” said Melody Webb, a spokeswoman for Johnson County District Attorney Steve Howe.

The same goes for the Kansas Secretary of State’s Office, the agency responsible for overseeing elections in the state. It said this week that it had received no inquiries from the Johnson County Sheriff’s Office.

Neither have four of the largest police departments in Kansas — Olathe, Overland Park, Lenexa and Shawnee. All said they had received no reports about election-related crimes in the last two years.

With less than a week before a primary election in which voters will decide, among other things, whether Kansans continue to have a constitutional right to an abortion, Johnson County Sheriff Calvin Hayden, a Republican, has said several times that he’s investigating election fraud. But he’s explained little about the nature of his investigation.

He gave his most expansive remarks in Las Vegas earlier this month at a convention of the Constitutional Sheriffs and Peace Officers Association, a group that claims to have supreme authority in county government, above that of local, state and federal officials. The group has called for law enforcement to investigate the 2020 presidential election results due to election fraud, a claim that has been debunked repeatedly.

“In these meetings, people started talking about the election issues and I thought, ‘Yeah, yeah you know, OK, because I always took for granted that the elections were OK. Then the presidential election came and there was this big overturn and in Johnson County… our guys, our election staff, was done at 8:30 at night. It was done,’” Hayden said at the convention.

“And President Trump did not carry our county — first time since 1914 that Johnson County didn’t vote Republican. Yeah, so it’s kinda interesting.”

Hayden, who is serving his second term as sheriff, referred to his own election victory in 2020.

“In fact, you’re looking at a guy — I got 260,000 votes and I got more than both presidential candidates and I’m way down ballot,” Hayden said. “And that bothers me.”

Hayden didn’t tell the crowd that he ran unopposed in 2020, unlike the presidential candidates.

Few outside the sheriff’s office appear to know what Hayden and his department are investigating.

“Our office has received voter questions about the administrative process and concerns about fraud in Johnson County,” Whitney Tempel, a spokesman for the Kansas Secretary of State’s Office, said in an email. “Every inquiry our office receives is reviewed and investigated. Thus far, no evidence of fraud has been found.”

The Johnson County Sheriff’s Office was asked again this week if it could describe the nature of the tips it has received about alleged election fraud or whether any of more than 200 tips it said it has received could be substantiated. Through a spokesperson, the sheriff’s office declined to answer.

The Midwest Newsroom filed a Kansas Open Records Act request for copies of the first page of any Kansas Standard Offense Report taken by the Johnson County Sheriff’s Office regarding alleged election-related crimes since 2020.

Law enforcement in Kansas fills out such offense reports to document reports of crimes. The first page of Kansas Standard Offense Reports, which contain basic information such as the date an incident took place, its location, the nature of an alleged offense and its victim or witnesses, is a public record. Subsequent pages, which list suspects and a description of how the alleged crime was committed, is not a public record.

In response, a records supervisor in the sheriff’s office provided one report and said a review turned up no other reports since 2020.

The lone report, dated July 20, lists the Johnson County Election Office as the location of an alleged violation of a Kansas law that makes it illegal to attempt to change, alter or destroy any vote cast by paper ballot or electronic machine.

Reached by phone, a 71-year-old Olathe woman listed as the victim of the alleged violation said she and her husband were casting an early vote on July 19. She declined to provide specifics about the incident.

“I don’t know what happened, if it was just an accident,” she said before declining to discuss the matter further.

Hayden’s office and Johnson County officials, through their spokespeople, declined to discuss the incident.

The Midwest Newsroom asked why the Johnson County Sheriff’s Office only had one offense report related to alleged violations of election laws after claiming it received more than 200 tips of such violations.

A sheriff’s spokeswoman said not every case generates a Kansas Standard Offense Report. When the Midwest Newsroom asked for copies of policies in the sheriff’s office dictating when standard offense reports should be taken, the spokeswoman said there was no such policy.

At the meeting, Hayden offered to involve law enforcement in election duties, according to a memo written by Johnson County’s chief counsel memorializing the discussion. That included having sheriff’s deputies pick up ballots from ballot drop boxes and having deputies present when votes were counted.

Hayden also asked why ballot drop boxes were available at public libraries in the 2020 elections and whether election officials would eliminate them in upcoming elections.

In a letter to Hayden, Johnson County’s chief legal counsel, Peg Trent, said she was concerned he was trying to meddle in an election.

“As we discussed, my concern is that these requests give the appearance that the Sheriff’s office is attempting to interfere with an election and to direct a duly authorized election official as to how an election will be conducted,” Trent wrote.

For more in-depth news from Iowa, Kansas, Missouri and Nebraska, we invite you to follow us on Twitter.