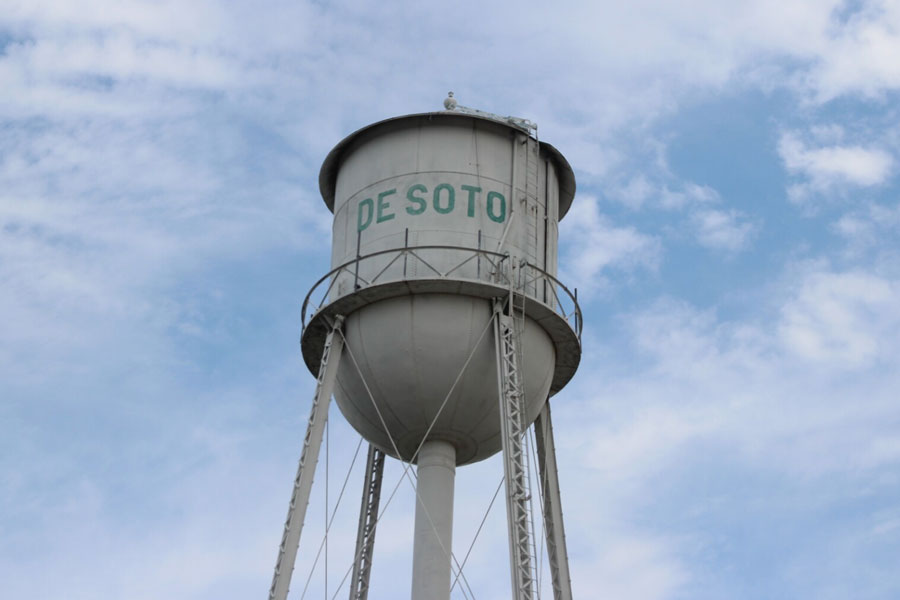 Panasonic announced it will build a $4 billion electric vehicle battery plant in the small but growing town of De Soto, Kansas. State officials say the plant will bring an estimated 4,000 jobs, and some say the town needs to improve its infrastructure before that happens. Photo credit Savannah Hawley/KCUR 89.3.

People in De Soto, Kansas, are feeling hopeful about the future of their town after Panasonic announced on July 13 that it will build a $4 billion plant in the town to make electric vehicle batteries for Tesla. Still, they have concerns about the environmental ramifications of the plant and how ready De Soto is to welcome thousands of newcomers.

Kansas officials estimate that the factory will bring about 4,000 new jobs to the quickly growing town on the edge of western Kansas City.

The state subsidies of more than $829 million — about $200,000 per employee — are tied to those employment levels.

The new plant will be built on the site of the former Sunflower Army Ammunition Plant. That plant was built in 1941, after Pearl Harbor, and was the largest smokeless powder and propellant manufacturing facility in the world. It’s also the largest undeveloped property near Kansas City.

The toxic materials the plant used for ammo production during three wars created a wasteland on the nearly 10,000-acre property and the area surrounding it. That waste is still being cleaned up, and when the ammunition plant closed in the late ‘90s, nothing else was developed because of the difficulty of clean-up.

That clean up worries Steve Bowlin, who runs a farm nearby. He said the Sunflower plant didn’t harm the soil on his family farm’s acreage, but the possibility of something going awry in the production of the EV batteries is worrisome for his business.

“The Sunflower plant is just sitting there degrading doing nothing,” Bowlin said. “At least it’ll be put back into production and not just sitting there. We raise produce, and produce is a lot more vulnerable than a row crop or something like that. (It’s) too early to really tell, but I don’t see that it could be that much worse than Sunflower was when it was in its glory.”

Paul Dunn has lived in De Soto for 15 years. He shares Bowlin’s concerns about the environmental toll of the new plant.

Dunn passes by the old ammunition plant property on his way to baseball fields in De Soto. He said despite the environmental concerns, he’s excited about new possibilities the plant brings to town.

“Hopefully it won’t grow too fast too quickly, but I think it’s a good move for De Soto,” Dunn said. “I’ve seen De Soto grow pretty quick — sometimes I think it might have grown too quick. So this is a big jump for us.”

To ensure that the town is ready for the plant — and the new jobs and people it will bring — Bowlin said De Soto needs to modernize its infrastructure.

“The infrastructure in De Soto, in general, is old,” Bowlin said. “I mean, some of it’s older than Sunflower, so there’s things that are going to have to be addressed. Hopefully, they’ve got foresight enough to look at it and figure out how to get it in place before the factory opens.”

Kathy Yates is currently looking for a house near De Soto for her and her family. She lives in western Shawnee, Kansas, and is excited about the job opportunities and growth the plant will bring.

“My son is getting ready to be a freshman and my daughter’s in eighth grade,” Yates said. “We fell in love with the family feel of out here. For me, it’s one of those small things that I’m excited for.”

Yates and Margo Kelly were talking about the Panasonic plant’s potential over breakfast at Perky’s Cafe in downtown De Soto.

“Having a huge corporation come here can do nothing but grow this part of town and bring in new jobs and new families and new developers with new homes, which is hard to find out here because it’s a very older established area,” Kelly said. “A new opportunity for people to see this and come this way, I think would be great.”

“(They have to build) apartment complexes for housing for the 4,000 new jobs that they’re going to be having here in De Soto,” Dunn said. But even without that housing, he’s thinking about other solutions.

“De Soto’s a good location between Lawrence and Olathe, Lenexa area,” he said. “They could live there and still come to De Soto and commute.”

Jenny McKee said her cousin is thinking about leaving her public school job and commuting from Lawrence to De Soto to work in the battery plant.

“Knowing how little she gets paid working for the school district, she’s like, ‘I could make a lot more money just commuting a couple of miles and working in a battery plant instead of pushing paper around a school district,’” McKee said.

While McKee said she’s worried about the environmental toll the vehicle battery plant will have on the town, the need for a job outweighs long-term concerns.

“I think people are just worried about supporting themselves when prices of groceries and gas and everything else is going up,” she said. “It’s like, where does your concern for those kinds of things line up with trying to take care of yourself?”

Yates said she understands the concerns about the town’s growth but said De Soto has already been changing. She said the Panasonic plant is just another example that change is going to happen regardless.

“This small town feel is going to go away at some point,” Yates said. “So if there’s opportunity for families to come here and see the amazingness, I don’t know that it would necessarily be a bad thing.”