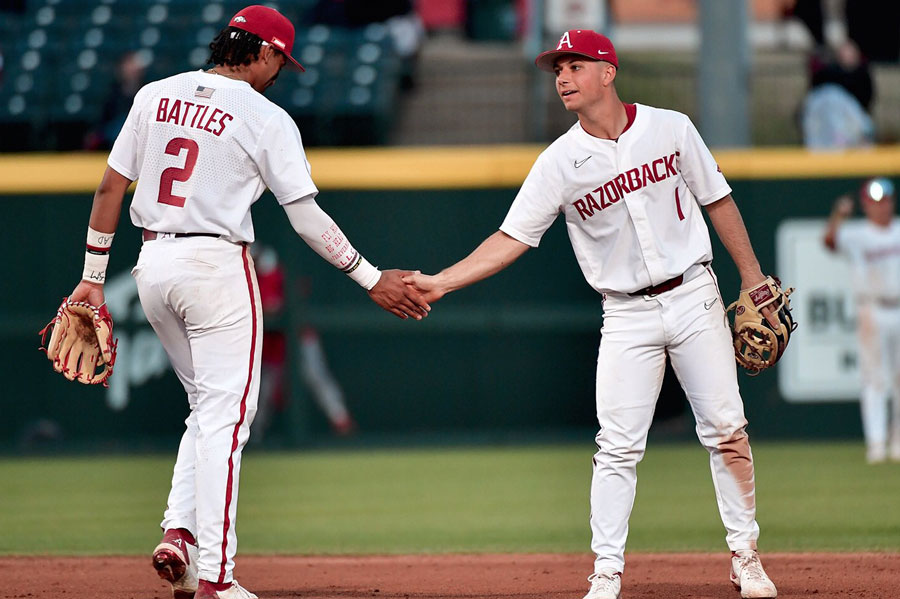 Robert Moore (right), a Shawnee Mission East graduate and standout for the University of Arkansas Razorback, was drafted Sunday night by the Milwaukee Brewers. Photo via Robert Moore Twitter.

The Milwaukee Brewers have drafted Robert Moore, a Shawnee Mission East graduate and son of Kansas City Royals President Dayton Moore, who went on to star at the University of Arkansas after his Lancer career.

What happened: Milwaukee selected Moore with the 72nd overall pick on Sunday night.

A stellar college career: A Leawood native, Moore has had a stellar career as a second baseman at the University of Arkansas, helping lead the Razorbacks to a College World Series appearance this year.

Key quote: “Thank you for taking a chance on me, Brewers,” Moore tweeted on July 17. “Tell me when and where, I’ll be there.”

What they’re saying: On Sunday and Monday, Moore and others reacted to the news on Twitter.

Thank you for taking a chance on me @Brewers!! Tell me when and where, Ill be there!! https://t.co/QkXKDebvDf

We had a chance to speak to Brewers Draft pick Robert Moore, son of Royals’ pres of baseball ops Dayton, and he made a point to thank the Milwaukee area scout — Mark Muzzi — “who stuck his neck out for me.”

“I’m going to be signing with the Brewers,” Moore said.

Congratulations to @__robertmoore_ and to the @Brewers for this pick. You guys will love Robert just as much as we do here in Arkansas. The best defensive player on earth, and also the most humble. Love you Robert; we’ll miss you!! 🐗 ⚾️ 💙