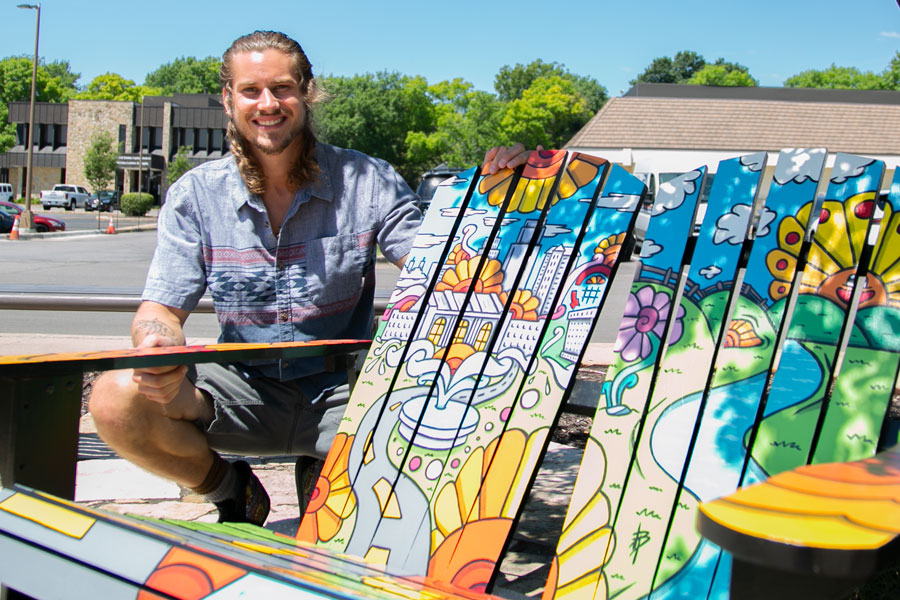 Evan Brown, an Overland Park-based muralist who goes by Doodle Dood, painted a piece of his “doodle-verse” for one lucky art enthusiast.

His piece, entitled Skylines and Scenic Views, is part of the Prairie Village Arts Council’s fundraiser — an Adirondack chair exhibit currently on display at Corinth Square.

About Brown: As a young child and into adolescence, Brown says he doodled in sketchbooks and margins. When he got to college at the University of Kansas — with intentions of becoming an architect — he found illustration design instead.

What’s the doodle-verse? The doodle-verse, a play on the word “multiverse,” is what Brown calls his vision for his hyper-focused style of artwork. He uses his doodle style to recreate elements of the real world.

Key quote: “Push hard for free, because at a certain point what’s free starts to become sustainable,” Brown said, when asked to give a piece of advice to young arts entrepreneurs. “I never would have imagined that — I’m year five (into his business) and I’m making maybe a little more than a graphic designer would make for a design firm. It’s patience and persistence for sure.”