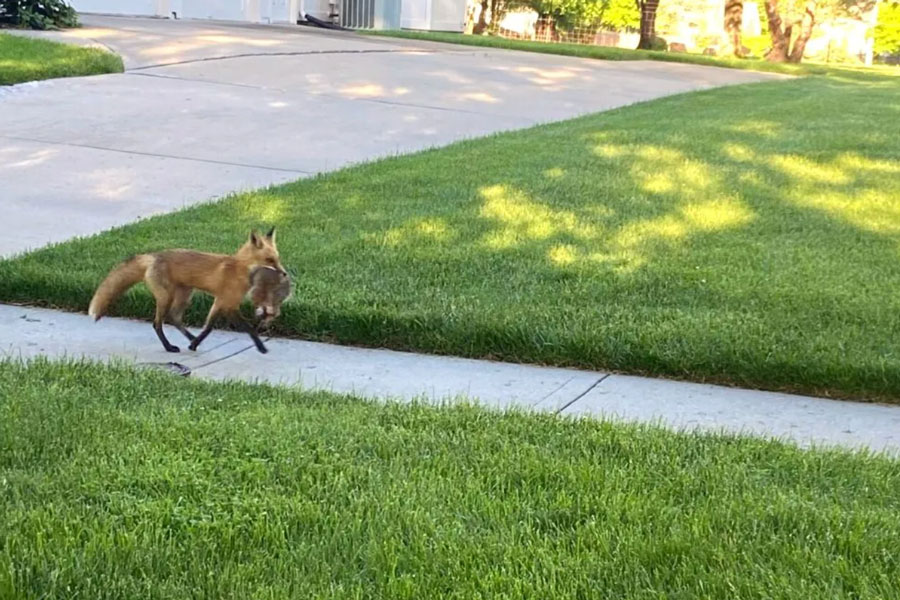 Leawood resident Georgiane Hayhow loved having a family of foxes living under her back patio. Though they would bring smelly carcasses to her yard, she said the experience was well worth the maintenance required. Photo courtesy Georgiane Hayhow.

The Kansas City area is home to more than 2 million people, driving to work, tending to lawns and gardens and enjoying parks and green spaces. As the region grows, so does the population of urban wildlife in KC that simultaneously thrives on cohabitation with human beings while also facing shrinking habitat.

Under patios, in trees and attics or burrowed in gardens, a variety of mammals, reptiles and birds live in close proximity to humans. And though seeing a baby fox or a bird’s nest in the wild can be delightful, interactions could be unsafe for people and for wildlife.

As breeding season for many species is underway, urban wildlife experts shared some best practices for making sure everybody gets along as safely as possible.

The most dangerous areas for urban wildlife in KC can be roadways surrounded by wooded areas and green spaces. Though these places can offer a great habitat, most wild animals unfortunately don’t understand the dangers of a busy street until it’s too late.

Tori Fugate, chief communications officer at the KC Pet Project, cautioned that dawn and dusk are the most common times of day to find animals in the middle of the street.

In more urban neighborhoods, Fugate said, motorists are most likely to encounter possums. They’re well adapted to cities, so drivers should watch the roads carefully when driving around places like Westport or the Crossroads neighborhood, she said.

If an animal has died, a concerned human can call 311 to have the corpse removed. If a creature is wounded, the best resource is the wildlife hospital at the Lakeside Nature Center, operated by the Kansas City Department of Parks and Recreation.

Jacque Blessington, director at Lakeside Nature Center, said that if infant possums have survived in the pouch of a dead mother, bringing in the mother’s body in a towel-lined box can allow wildlife rehabilitators to rescue the infants.

Turtles can also require special attention. Blessington said that if a turtle is in the middle of the road, it is best to place the turtle on the side of the road they’re walking toward — otherwise, the turtle will just turn around and try to cross the road again.

Leaving food out for urban wildlife in KC

If families are seeing a lot of wildlife near their homes, it’s likely because the animals are regularly finding food there.

This could be a bird feeder, bowls of pet food, or a garden of vegetables that can provide a nice dinner for deer, raccoons or birds.

Blessington said these culinary attractions are not necessarily a bad thing. She likes to leave scraps of food outside to feed raccoons and possums. However, not every food is good for every animal.

“For example, feeding bread to waterfowl is a horrible idea because it’s not (nutritionally) good for them,” she said. “There’s some mixed reviews on putting out corn for deer in the wintertime because their digestive physiology changes with the season.”

Cruciferous vegetables such as broccoli, cauliflower, cabbage and kale are almost universally bad for local herbivores. These vegetables can give rabbits or deer gas and damage their digestive systems.

As a general rule, native plants are the safest for urban wildlife in KC because these are the plants that they have adapted to for thousands of years.

Georgiane Hayhow, who lives in Leawood in Johnson County, Kansas, first discovered a den of foxes living under her porch in April.

The first fox she saw was the mother, who was snooping around her backyard. Over the following weeks, Hayhow would discover that this fox had six kits in her den as they grew and began to play in the lawn.

It quickly became a fun activity for her family. They positioned a camera outside the den so they could all watch the baby foxes from a distance, and she said her four kids told all of their teachers and friends. They left dog toys out for the foxes to play with, and the foxes returned the favor with cute pawprints on the patio furniture.

“They really love a slightly seared salmon, with no flavoring of course, and fresh blueberries and a little bit of brown rice,” Hayhow said.

Hayhow made sure to research what foods were healthy for foxes, and she had fun cooking for them every now and then. On Easter, when her kids dyed eggs for an Easter egg hunt, the mother fox stole all 15 of the eggs to feed her kits.

There were, of course, some drawbacks to living with foxes. They would leave rabbit carcasses in the den, leaving a nasty smell, and she had to pick up fox scat from the grass.

But overall, Hayhow found it to be an experience that her family will remember for a long time.

“It was a little bit of maintenance, but the payoff was more than worth it for the experience,” she said. “I loved them. The kids absolutely loved them. Grandparents would come over, and we’d all watch them together.”

When the foxes were old enough that they began to make her cat nervous, she decided it was time to gently nudge them out. After trying a few options, she eventually filled in half of the den and left a stick of Axe deodorant inside. Needless to say, the foxes quickly moved out.

“I feel really strongly that it’s our responsibility to take care of the wild animals that are out here too,” Hayhow said. “My kids are well trained to know that if we are outside, you don’t mess with anything … If I can provide a safe haven for (wildlife), and it’s fine with me, I’m happy to host.”

Should someone relocate an animal that’s living on their property?

While hosting the fox family worked out well for Hayhow, who lives in an open, suburban area, it’s not an option for everybody.

If property owners need to remove an animal from their yard, Blessington said that relocating the creature by force should always be the last resort. She encourages Kansas City residents to consider what would be the least invasive option.

“Option one, the least invasive to wildlife, is to let them be, especially if it’s a family, because they’ll move on,” Blessington said. “If you can safely let mom raise those babies, she’s going to move on and they’re probably all going to disperse once old enough. That’s always the easiest, safest option for wildlife.”

The same is true for possums, which are a generally nomadic species. They will rarely set up a permanent den near a house or apartment.

If wildlife is disruptive to a home, bothering pets or children or destroying furniture, Blessington said the next best option would be to encourage the animals to move by gently making their yard a less comfortable home.

She said there are a variety of products available for this purpose, including noise machines, motion-sensor lights, or even leaving an ammonia-soaked cloth in a Ziploc bag with holes poked in it. Or, as Hayhow discovered, strong deodorant.

After the family migrates away, it’s important to make sure they can’t come back, Blessington said. This means closing any possible entrances to an attic, filling in an empty den, or repairing a fence.

If all else fails, Blessington said relocation can be a last option, though this may sometimes have unfavorable consequences for the animal.

“You should not relocate a groundhog in October and think that it’s going to necessarily survive,” she said. This is because they require a very specific habitat in the wintertime for hibernation.

“Those are questions we ask homeowners to think about. Is it breeding season? Are there babies out there? Are they getting ready to go into hibernation?” 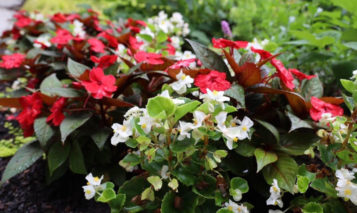 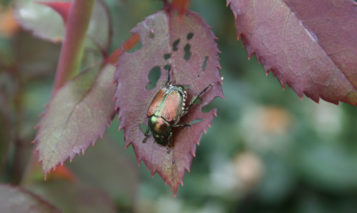 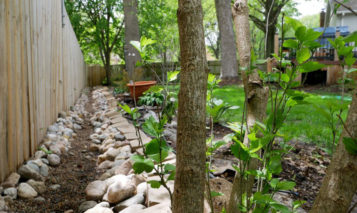 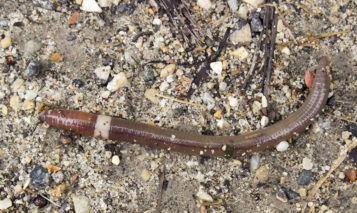 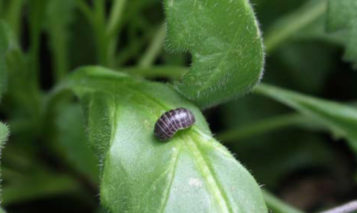