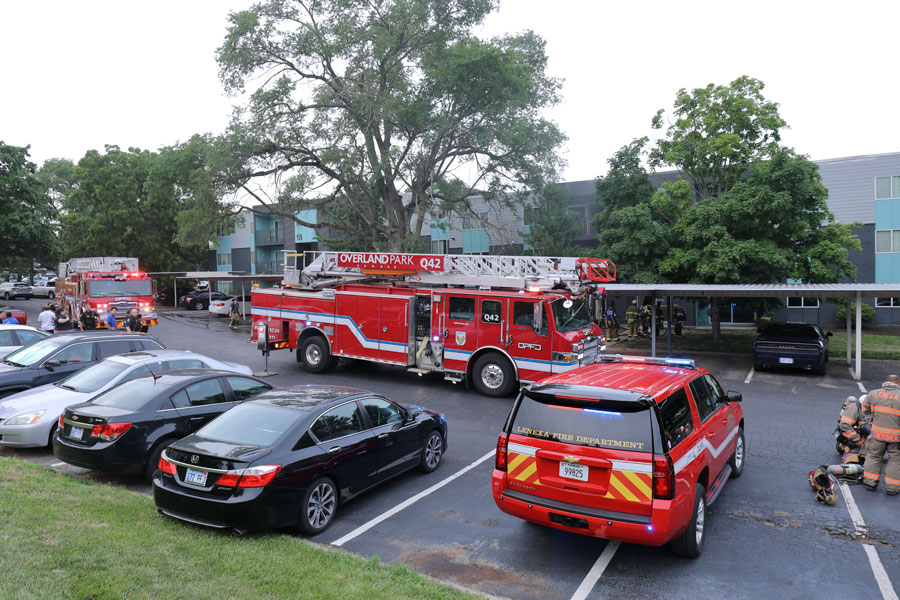 Two people and numerous pets were rescued from an apartment fire on Monday evening in Lenexa.

At 6:47 p.m., Lenexa and Overland Park firefighters, along with Johnson County Med-Act paramedics, were dispatched to The Wilder Apartments, 9655 Monrovia Street, after at least two callers reported flames visible from a second-floor apartment balcony.

Lenexa police officers arrived first and reported heavy smoke visible from a balcony door on the second floor. Officers entered the building to make sure everyone was evacuating.

In a press release posted to the department’s Facebook and Twitter, the Lenexa Fire Department says that two people were rescued from a third-floor balcony.

The fire in the second-floor apartment was brought under control in about 20 minutes.

The release says firefighters rescued two dogs and ten cats from the building.

Two of the cats were transported to an emergency vet clinic by Lenexa Animal Control for treatment of possible smoke inhalation. A neighbor tells the Post that the two cats were rescued from the apartment in which the fire occurred.

Lenexa Fire says 12 apartments will have smoke damage, and approximately ten families were displaced due to smoke and water damage.

Fire investigators remained at the scene until shortly after midnight Tuesday morning. The cause of the fire remains under investigation.