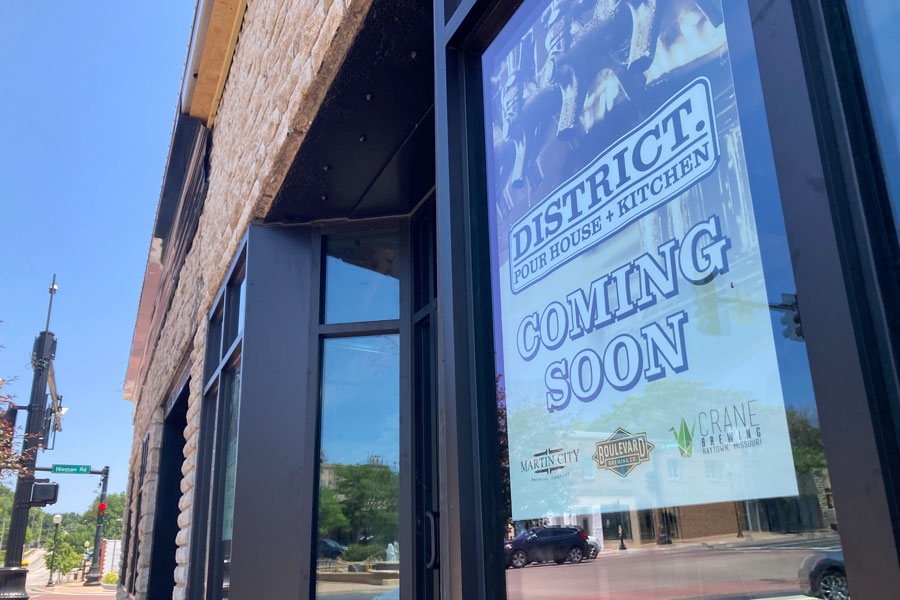 Correction: Building owner Dan Pflumm says he has not spent more than $1 million on this project, which an earlier version of this story stated.

There’s no lease and no opening date set, but the intentions of the District. Pour House + Kitchen are solid enough to put a “Coming Soon” sign in the window of the Shawnee State Bank building in downtown Shawnee.

Building owner Dan Pflumm said work is ongoing on the interior and exterior of the building at the southwest corner of Johnson Drive and Nieman Road, with a substantial amount still to be done. He hopes for completion in the fall, but a lot will depend on the economy.

Pflumm said the business has done extensive planning and expressed verbally its interest in the location but no lease has yet been signed.

In the meantime, the Shawnee State Bank building has undergone a major change. The glass and steel wrapping has been removed from most of the building, exposing the original stone work from the 111-year-old structure.

The corner entrance has also been restored, along with the windows across the front. Also in the plans is a garage door that could be opened for the restaurant in good weather, Pflumm said.

“We put the building back the way it was over 100 years ago,” he said. Pflumm has said in the past he is investing $1 million into the project.

Representatives from the gastropub could not be reached for comment Monday.