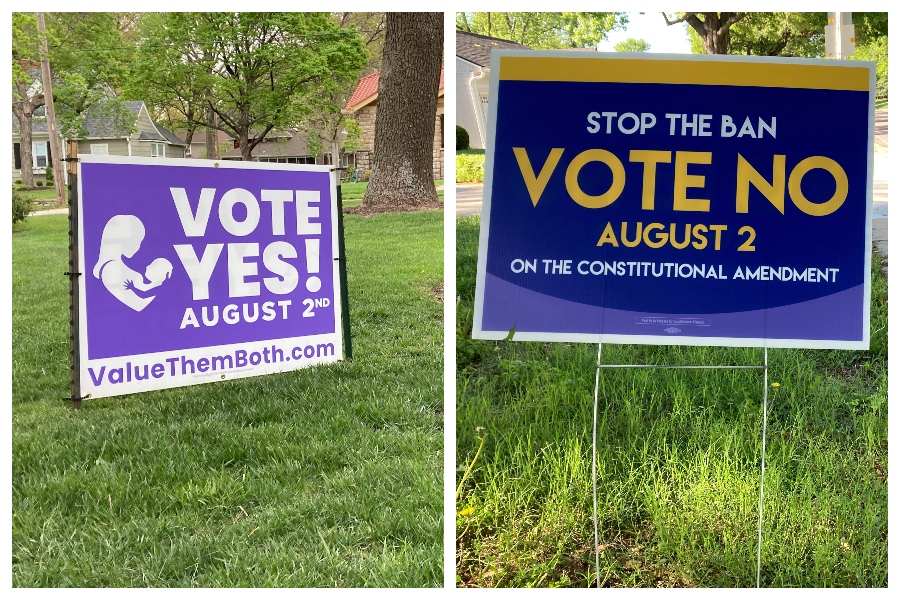 Signs in Johnson County urging voters to vote "yes" and "no" on the August 2 abortion amendment. Photo credits Kyle Palmer.

Why am I seeing this story? While The Post typically focuses on local issues at the exclusion of statewide or national politics, we’ve received multiple inquiries from readers in recent weeks about the signs that have been popping up around town advocating for or against the proposed “Value The Both” amendment. Specifically, readers wanted to know whether it was legal for churches to display signs advocating for a political cause given their tax exempt status.

We try our best to be responsive to reader inquiries, which is why we decided to take a look at the campaigns for and against the amendment and the rules that govern churches’ involvement in politics.

(If you’ve got a suggestion for a topic we ought to consider covering or a question that’s been nagging at you, please send it our way!)

Significant money is flowing to influence the outcome of the vote on the proposed amendment to the Kansas Constitution regarding abortion.

The amendment, dubbed “Value Them Both” by its supporters, will be on the Aug. 2 ballot and aims to nullify the impact of a 2019 Kansas Supreme Court decision that guaranteed a constitutional right to abortion by specifying that the state constitution “does not create or secure a right to abortion.”

• Kansans on Aug. 2 will vote on an amendment dubbed “Value Them Both” that would return the state legislature’s authority to restrict access to abortion services.

• Why do churches have signs on their property? In general, election law allows religious organizations to advocate for issues — but not individual political candidates — as long as their contributions are not a “substantial” proportion of their overall activity.

Financial reports filed with the Kansas Governmental Ethics Commission show that as of six months ago more than a million dollars were already in the coffers of “Value them Both” supporters.

Opponents of the amendment, who generally want to preserve abortion protections in Kansas, have so far raised roughly $536,000. Opponents say “Value them Both” would remove a final barrier that prevents the Kansas legislature from severely curtailing access to abortion services.

Biggest donors in support of amendment

The reports on file only cover the calendar year 2021. That was five months before reporting of a leaked draft of a U.S. Supreme Court opinion that indicates a willingness by the majority of justices to overturn Roe v. Wade.

According to the financial reports, the Catholic Church has so far been a major contributor to the effort supporting the amendment.

The Value Them Both Association reported over $1.2 million in contributions last year. Of that:

Six groups supporting the amendment filed reports with the commission. Besides the Value Them Both Association, they include: Kansans for Life, the Kansans for Life PAC, Kansas Family Voice, Save the Babies and the Family Policy Alliance of Kansas.

Second largest in amount raised for the amendment was Kansans for Life of Wichita, with $130,059 for the year on the amendment. That group gave multiple times to the Value Them Both Association, totaling $385,000.

Kansans for Life and its PAC reported numerous small donations from individuals, with three standouts – a Lake Quivira couple and a Wichita man who put in $10,000 each and another Wichita man who contributed $15,000.

Biggest donors in opposition to the amendment

Three groups against the amendment reported to the commission.

They were the American Civil Liberties Union Foundation, ACLU of Kansas and Kansans for Constitutional Freedom, an Overland Park group that has coordinated the opposition.

The ACLU Foundation reported $75,000 in contributions from the Center for Reproductive Rights.

Kansans for Constitutional Freedom reported $461,309 in contributions from individuals and groups that included the ACLU, Trust Women Foundation and Planned Parenthood.

There were also a few individual donations, with the highest being a Denver man who contributed $75,000.

The Catholic Church has been highly visible in its support of the amendment. The Kansas Catholic Conference is listed as a coordinator with the Value Them Both coalition.

The Kansas City in Kansas Archdiocese has also been vocal.

Its website carries a page dedicated to Value Them Both, with a statement of support from Archbishop Joseph F. Naumann, a headline urging viewers to “Vote Yes on Aug. 2” and a clock counting down the seconds until the polls close.

Church involvement in the ballot question has prompted questions from some Post readers over whether such advocacy is legal, given the church’s tax-exempt status.

But, as the Freedom From Religion Foundation’s background information demonstrates, while the law is clear that non-profits cannot endorse political candidates, there’s more leeway when it comes to ballot referendums.

Organizations classified as 501(c)(3), which include churches, charities and educational nonprofits, typically cannot engage in political activity or lobbying, unlike 501(c)(4) organizations.

But a 501(c)(3) can campaign for an issue, as long as the amount it spends on that campaign is considered insubstantial to the rest of the group’s activities.

When the Post reached out to the Archdiocese of Kansas City in Kansas for this story, the archdiocese forwarded a Value Them Both web page outlining “why churches can advocate for the value them both constitutional amendment.”

According to their explanation, churches may not spend more than 15% of their total expenditures for the year on their campaign.

In Kansas, a church, individual or organization spending or raising money on a constitutional amendment campaign must file a state ethics report if they spent at least $50.