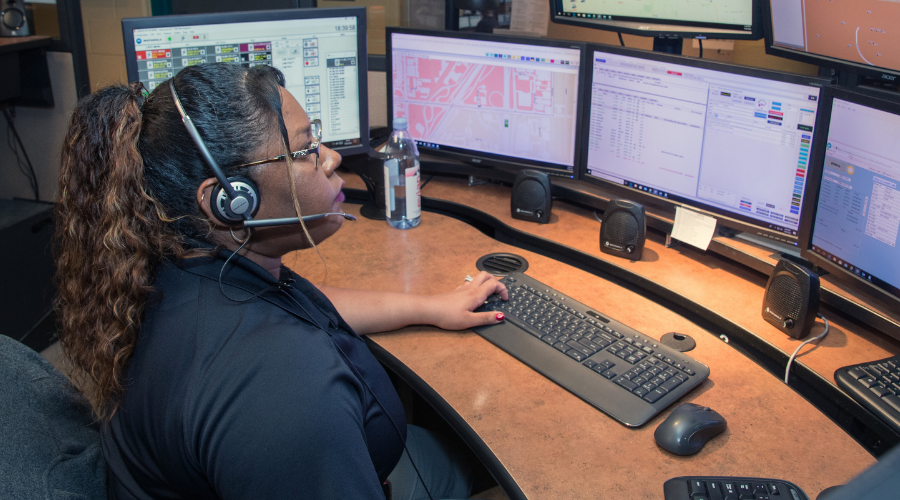 Petline Noon transferred from a Florida law enforcement agency to the Lenexa Police Department as a dispatcher in 2020.

When I fell into dispatching, I had no intentions of staying,” said Petline Noon, Lenexa Police Department Dispatcher I.

“It just started coming naturally to the point where I felt like I didn’t need to be a police officer to make a difference,” Petline said. “I was still making a difference and helping people the way that I wanted to, just from behind a desk.”

Petline took a criminal justice class as an elective during her junior year in high school in Kissimmee, Florida. Once she graduated in 2006, she applied for a dispatcher position with a local law enforcement agency.

“I figured that’s a good way to give it a shot to see if the law enforcement world is where I really wanted to be,” she said. “I just ended up really falling in love with it and that’s where I stayed ever since.”

Before Petline ever took a live call as an 18-year-old dispatcher in Florida, she participated in rigorous training, including suicide intervention, stress management, terrorism, domestic violence, first aid and emergency dispatch.

“I almost actually didn’t make it out of training because it was very intense,” she said. “Things were just not clicking for me, and I had a couple of intense squad members who were challenging to train with and be around, but it’s also what motivated me to prove that I was meant to be in the communications center.”

When Petline took the floor as a newly trained dispatcher, her first call came within five minutes.

“The person said, ‘I just shot my neighbor in the head,’” she said. “It was intense from the first sentence that came out of this person’s mouth. To take something of that magnitude right off the bat by myself — because when you’re in training, you’ve got someone who can just take over for you and kind of just sit back and let them do their thing — it can have an intense impact.”

The more calls she took, the more comfortable and confident she became in dispatching.

“It was extremely intimidating because of my age and because of my limited life experience,” Petline said. “Everyone was so much more tenured and even had kids my age, so I always had to prove that I belonged. I just walked in one day and it’s like the light bulb finally went on and everything made sense. I just kept improving as the time went on.”

For her, that meant getting to work early, leaving late and taking advantage of every training opportunity. This is a mindset and work ethic she has carried with her to the Lenexa Police Department.

“I think what makes a good dispatcher, or just a good worker in general, is admitting that you don’t know everything and that you want to continue learning about it,” Petline said. “I’m always learning, and I love to learn.”

Transferring to the Lenexa Police Department

From suicidal calls, accidental drownings and sex crimes involving minors to shootings and home invasions, Petline has answered approximately 100,000 911 calls during her career so far as a dispatcher.

“I came from an agency where we did about one million calls for service a year, whereas we do about 50,000 in Lenexa,” she said. “This is so much better for me because constantly being that busy at my old agency — it just wears you out very quickly. I appreciate that we are a slower agency where, if you take a crazy call, you’ve got a little bit of time to relax and decompress so that you can jump back in fresh with whatever else comes in. You didn’t get that all the time at my old agency. You put an emergency on hold and it’s another emergency that you’re picking up. From the minute you came in, to the minute you left, your brain was always working overtime.”

Feeling burnout and ready for change, Petline and her husband Andrew decided to move from the coast of Florida to the Midwest.

“We were both a little dissatisfied with our jobs,” she said. “We were looking for fresh starts and we both felt like if we’re going to do this, we need to do it now while we’re still young enough to build up a good number of years of service with an organization.”

While the Kansas City metro area was familiar to Petline since she had visited several times with Andrew, who grew up here, she had never heard of the City of Lenexa.

“When I started my job search, I had kind of plugged in the area where we were thinking of living and kind of started my search that way to see which police departments were close by, and looked at reviews just to kind of see what the community thought of these different places,” she said.

That’s when she came across the Lenexa Police Department.

“When I had looked up reviews on the department, the community as a whole really loved its department,” Petline said. “That stood out for me the most compared to some of the other local agencies I applied at.”

Since transferring to Lenexa in 2020 as a dispatcher, Petline has taken interest in opportunities beyond her civilian position duties.

“My abilities are not limited to just what we do here in this room,” Petline said. “I’m now part of the crisis negotiations team — at my old agency, we didn’t have a whole lot of opportunity like that for the civilian employees to get involved with the public.”

Her passion for her job is the people she gets to serve, especially those with a mental illness.

“No one wakes up one day and chooses to be mentally ill,” she said. “There’s a stigma surrounding mental illness in general, so when we have people that call in who want to get help, that’s a big first step anyway, you know, admitting that you need help. I’ve taken quite a few classes on mental illness, different types of mental illnesses and how to respond to them appropriately as a crisis negotiator. It’s just another area that I’m able to explore now to help people in crisis.”

At the end of the day, dispatchers are more than phone operators.

“We are not your typical phone operator that you see,” Petline said. “We’re not just picking up phone calls and transferring to other divisions. We wear so many different hats in this role. We’re a counselor and we’re a medical professional, then we are telling people where to go and how to get there. We even help units set a perimeter if there’s some kind of crime going on.”

Petline lives in Shawnee with her husband Andrew and their 11-year-old son, Andrew, Jr. Outside of work, Petline enjoys staying active through weight training and cardio kickboxing and reading the latest book by her favorite author, James Patterson. Petline plans to graduate with her bachelor’s degree in the fall of 2023.