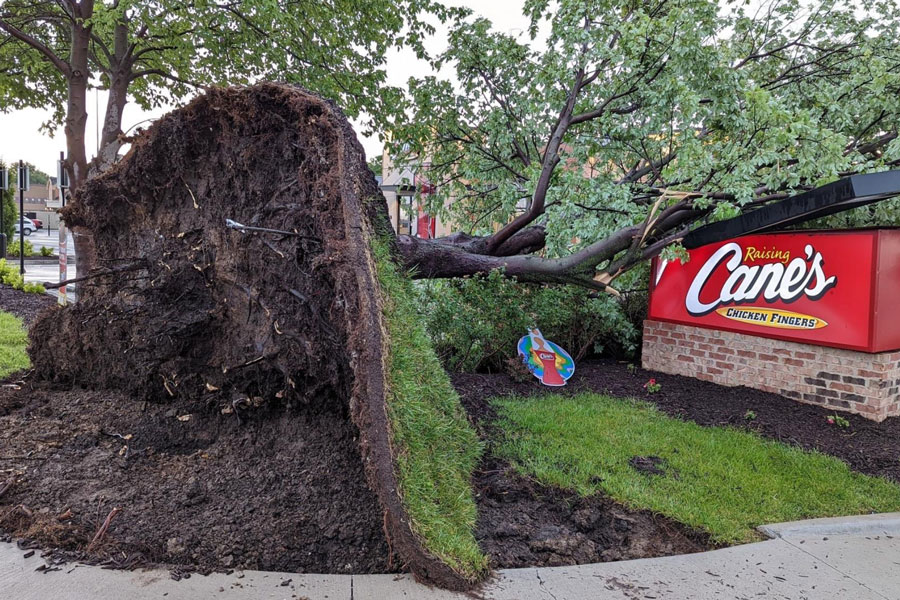 A tree uprooted along 95th Street in Overland Park, seen in the light of Wednesday morning. Image via City of Overland Park Twitter account.

Johnson County and the rest of the Kansas City metro are beginning cleanup efforts following Wednesday morning’s bout of severe weather that appears to have produced at least one tornado.

The National Weather Service’s Kansas City field off has yet to confirm if a tornado touched down in Johnson County, but the office tweeted at 1:25 a.m. Wednesday that “radar confirmed a tornado” near Leawood.

The city of Overland Park tweeted out an image taken from a traffic camera at the intersection of 95th Street and Metcalf that appears to show cloud rotation.

.@OPEmergPrep confirmed all outdoor warning sirens in the city were activated. At that same time, traffic cameras spotted rotation near 95th and Metcalf, which you can see in the image below. pic.twitter.com/u8qfED7tZl

The area around 95th Street between Pflumm Road in Lenexa and State Line Road in Leawood seems to have been where much of the most severe damage was concentrated Wednesday.

Here are some images of what the storm left in its wake taken Wednesday morning by the Post’s freelance correspondent Mike Frizzell: