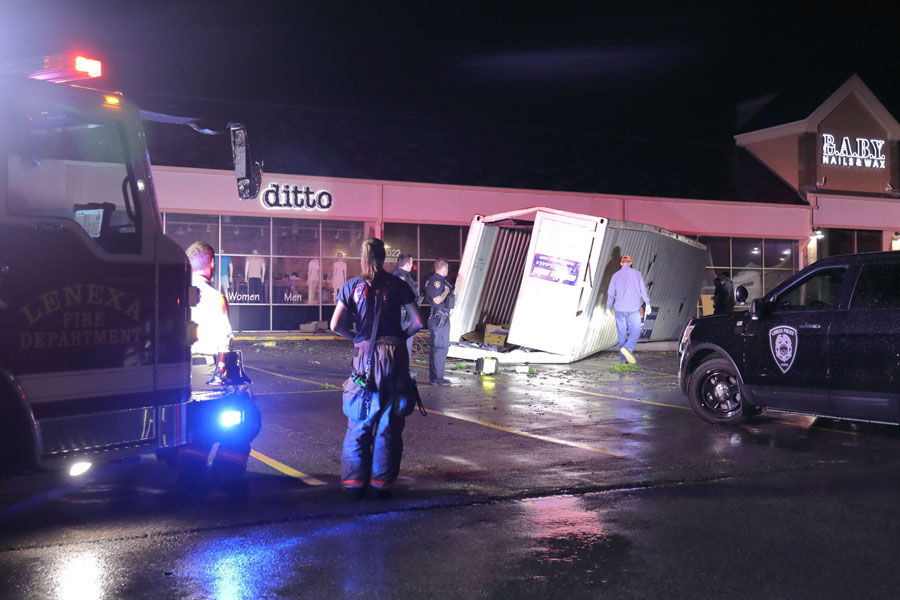 Mike Frizzell contributed to this report.

Tornado sirens sent Johnson Countians scurrying to their basements and interior hallways early Wednesday morning as a line of severe thunderstorms that appears to have produced at least one tornado rolled through the Kansas City metro.

Here’s what we know:

1:17-1:23 AM. Tornado looks to have formed formed near 95th & Antioch in Overland Park, KS and traveled east along 95th to at least State Line. This is preliminary. #MOwx #KSwx @kmbc

What our correspondent saw: Freelance reporter Mike Frizzell was on the scene along 95th Street early Wednesday morning after the storm had passed through. These are some things he saw:

This is the shopping center on the NE corner.

Police standing by with a damaged business window. pic.twitter.com/iLw3EkNCLD

More damage in the parking lot of @jackstackbbq on 95th and Metcalf. @KCTV5 pic.twitter.com/KtcxGeKNqq

This is Glenwood Street, right off of 95th in OP. This little neighborhood is a mess. Police tell me no one hurt, but there are downed power lines, and obviously a lot of tree debris. pic.twitter.com/pjuNUP96VD

Elsewhere in metro: Police in Lee’s Summit say a lightning strike likely caused a house fire at around 2 a.m. that was mostly brought under control by 2:30 a.m.