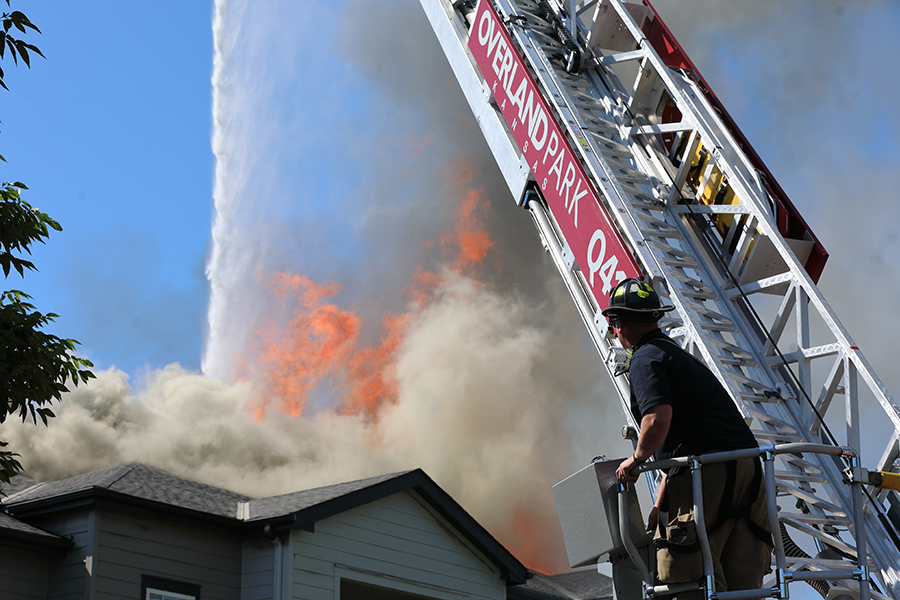 An Overland Park firefighter controlled an aerial to put water on the flames after interior crews were evacuated from the Highland Apartments in Overland Park Friday. Photo credit Mike Frizzell.

UPDATE: Overland Park Fire Department information officer Jason Rhoades on Saturday issued the following release on the cause of the fire:

“Overland Park Fire Investigators believe the fire that claimed an eight unit apartment building in the Highlands Apartments in the 8000 block of Farley on Friday afternoon was caused by careless discard of smoking materials. It’s believed smoking materials improperly discarded on a second story balcony burned in a void space and spread to the building’s attic, where it burned undetected until residents heard noises in the attic and called 9-1-1. The fire is believed to be accidental in nature.”

Firefighters from Overland Park and Lenexa were first dispatched to the Highlands Apartments, 8050 Farley Street, at 3:49 p.m.

Responding firefighters were told that there was possibly someone trapped in the building. On arrival, crews reported heavy smoke from the two-story apartment building.

“Firefighters began an offensive fire attack in the attic of the structure, while additional crews assisted a person with mobility issues from the scene,” Overland Park Media Manager Jason Rhodes said in a news release.

Fire crews searched the building once to confirm everyone was out safely before the growing fire forced them to evacuate.

“During the firefight, crews began to see ceiling collapses, and the fire broke through the roof of the building,” Rhodes said.

Firefighters were pulled from the building after the fire tore through the roof. They were able to keep the fire from spreading to a neighboring building.

The fire was brought under control in about an hour.

Rhodes says firefighters will remain on the scene throughout the evening to conduct overhaul operations and ensure that all hotspots have been extinguished.

The building is believed to be a total loss, and the cause of the fire remains under investigation.