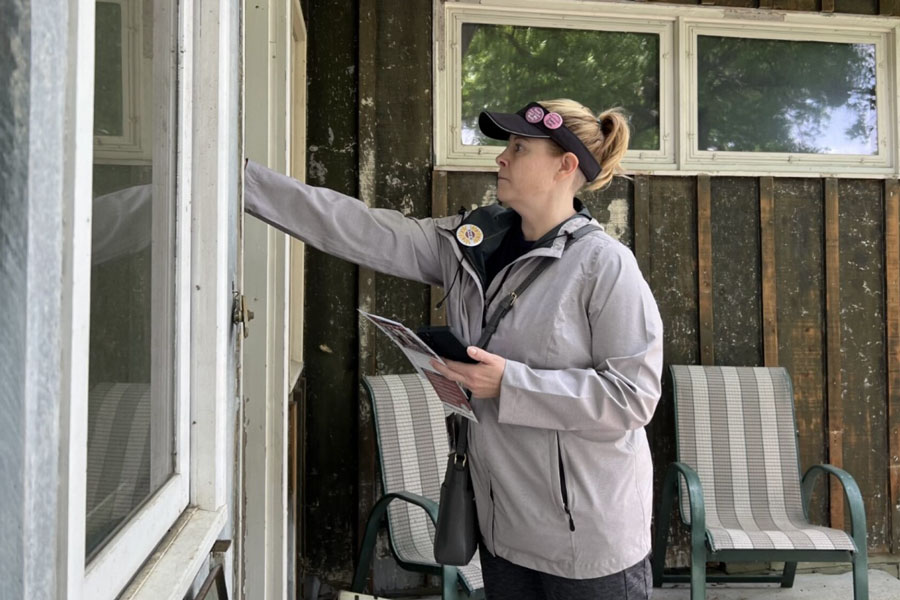 Kansas Democrats and activists who want to protect the right to abortion recently ramped up their efforts to defeat a constitutional amendment in August in anticipation of the U.S. Supreme Court’s overturning of federal abortion rights.

Former Democratic lawmaker Jennifer Day from Overland Park said she and others have been canvassing for months to educate voters on the upcoming ballot measure, but interest to help the cause in Johnson County spiked after the leaked ruling.

The leaked ruling from the U.S. Supreme Court showed a decades-old federal ruling, Roe v. Wade, looks to be overturned this year.

“We’ve just been flooded with people all across the county who want to volunteer,” Day said.

Losing federal protections would mean the Kansas Constitution would be the only protection for abortion rights in Kansas. A Kansas Supreme Court ruling in 2019 concluded the state constitution includes the right to an abortion.

Kansas voters will decide on Aug. 2 whether to amend the state constitution with a provision that says it doesn’t promise access to abortion. All Kansas voters may cast a ballot on the issue in that primary, regardless of party affiliation.

If approved, abortion access would not banned immediately. Instead, lawmakers would have new-found the authority to pass stricter laws, even a ban. But if the amendment fails, abortion rights will continue in Kansas.

“I’d like those rights to stay in place,” Day said. “Let’s vote no so we can keep bodily autonomy here in Kansas.”

Despite groups that support the amendment characterizing it as an opportunity to put the issue back into the hands of lawmakers, some fear the Republican-led Kansas Legislature would quickly follow neighboring states to approve near-total bans on abortion.

At least one bill banning abortion has already been introduced in the Kansas Legislature, and does not appear to allow exceptions even in cases of rape or incest. Lawmakers did not take action on the bill before adjourning for the rest of 2022.

Kansans for Constitutional Freedom, a bipartisan organization opposing the amendment, contends nothing would protect abortion rights in Kansas if voters OK the amendment.

“The only thing protecting our rights is the Kansas Constitution,” said spokesperson Ashley All. “That means we need to do everything we can to protect our rights here at home.”

Meanwhile, neighboring states have approved significant bans on abortion that have led to residents looking for abortion services in Kansas. Oklahoma approved a near-total ban on abortion earlier this year, and Texas enacted significant abortion restrictions in 2021. Kansas saw an increase of women seeking service then, making it an abortion refuge.

If the nation’s high court does overturn Roe v. Wade, the country would then be covered with a state-by-state patchwork of differing abortion laws. That, in turn, could lead to more women to travel from their home states for places where it remains legal, including Kansas.

Mackenzie Haddix, spokesperson for the Value Them Both Coalition that supports the amendment, said Kansas is already a destination for late-term abortions and its laws are “among the most extreme states in the nation.”

“If Kansans want to stop this, they must vote YES on Value Them Both,” she said in a statement.

All, the abortion rights advocate, disagreed with that characterization of Kansas law. State reports on abortion show no late-term abortions have occurred in Kansas since 2018, and abortion after 22 weeks is already banned, among several other restrictions already active.

“(Even) if we vote no,” All said, “those regulations stay in place.”