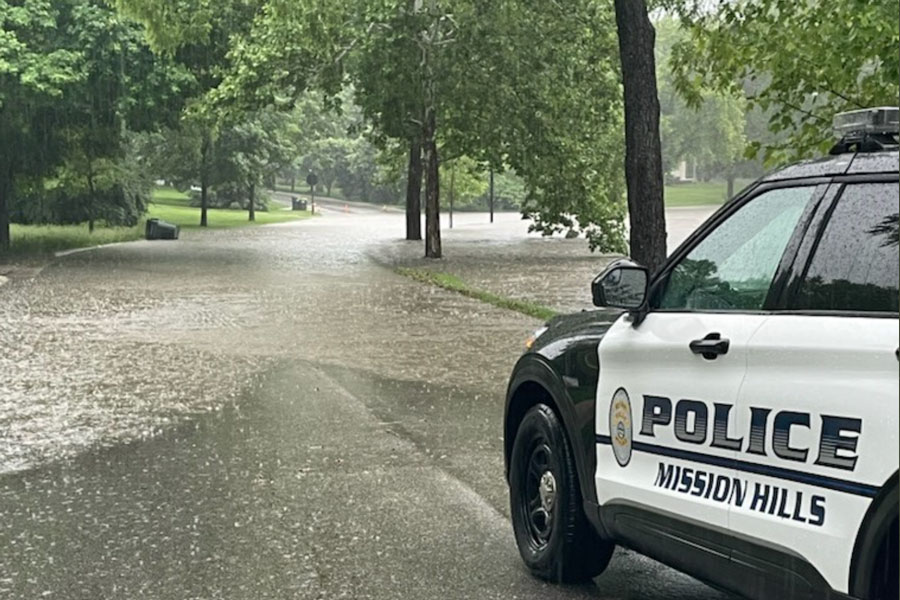 Tuesday marked a record for precipitation on May 31 in the Kansas City area, with more than 2.5 inches having fallen by noon. Image of a flooded roadway near Mission Hills Country Club via Prairie Village Police Department Twitter

Johnson County and much of the rest of the Kansas City metro will remain under a flood warning through at least 3:45 p.m. Tuesday after several large downpours this morning led to record rainfall totals in parts of the region.

How much rain did we get? According to the National Weather Service’s Kansas City field office, Tuesday set a precipitation record for Kansas City for May 31st.

***RECORD***
As of 7AM…KC has already received 2.56" of precipitation for the day breaking the old daily record of 2.44" set in 1996!#RecordBreakingKC#SoggyTacos

What the rest of Tuesday looks like: The National Weather Service office in Kansas City predicts chances of showers and thunderstorms going into Wednesday, with a 60% chance of rain lingering today and a 70% chance of rain tonight.

Scattered non-severe showers and storms this morning. Additional storms develop later this afternoon/evening, mainly south of the MO River. A few of these storms could be severe w/ damaging winds and large hail possible in the strongest storms. pic.twitter.com/bAev6gYEFL

Flooding in Johnson County: The NWS said they are mostly getting reports of flooding in ditches and drainage areas.

Today is a great reminder of just how quickly a creek can flood with heavy rains. Don't forget – turn around and don't drown! These photos are of the current situation in the 5500 blk of Mission Dr, State Park and Belinder, and the 6200 blk of Indian Ln. pic.twitter.com/Qa3fTZBLay

Staying safe: Due to the possibility of accidents and vehicles stalling in the rain, Cutter said it’s important for residents to take extra caution when driving in high water levels today.