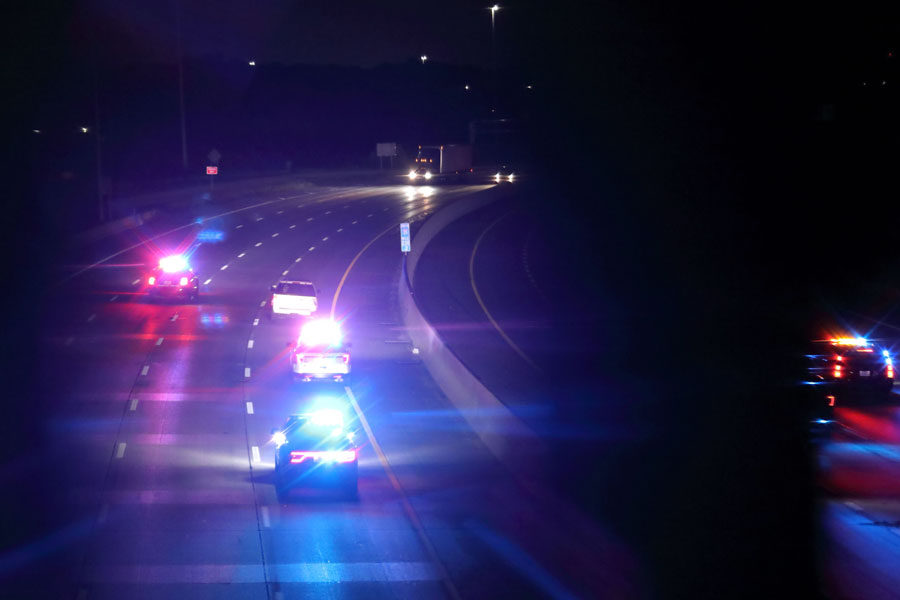 Police pursue a white SUV going north in the southbound lanes of I-35 in Overland Park early Monday morning. The driver of the SUV was eventually arrested in Merriam after winding through northeast Johnson County and parts of Kansas City, Kansas. Photo credit Mike Frizzell.

Overland Park Police arrested a man after leading them on a wrong-way chase from Interstate 435 and Quivira Road to Kansas City, Kansas, and then back into northern Johnson County early Monday.

Just before 12:20 a.m. Monday, Lenexa Police were dispatched to check on a reported wrong-way driver in the area of Interstate 435 and Kansas Highway 10.

At least two callers reported a white vehicle driving eastbound in the westbound lanes of I-435.

At 12:27 a.m., an Overland Park Police sergeant spotted a white SUV driving in reverse on 109th Street at Quivira Road. The SUV drove away when the sergeant tried to make a traffic stop.

Recorded radio traffic states that the driver then entered the westbound lanes of I-435 driving eastbound.

Overland Park Police Sergeant George Naylor confirms that the man driving the SUV called 911 during the pursuit. Radio traffic indicates that he told dispatchers that he had a child with him in the vehicle.

“He was kind enough to call us and tell us who he was, but he just kept going,” Naylor told the Post after the pursuit.

At Interstate 635, the driver returned to the right side of the highway and continued into Kansas City, Kansas.

Two Overland Park officers continued to pursue the SUV on eastbound Interstate 70 and then south on the 18th Street Expressway, where he exited at Metropolitan Avenue.

Kansas City, Kansas, officers hit the SUVs tires with stop sticks at least twice as he drove on side streets through the Argentine and Turner neighborhoods. Reported speeds remained at or below the posted speed limit.

The man then led officers south of South 53rd Street to the Merriam city line at West 47th Street, where he turned east. A Kansas City, Kansas officer, tossed stop sticks in front of the SUV’s one remaining tire.

At 1:05 a.m., just after running over the stop sticks, the SUV rolled to a stop on 47th Street just west of Knox Avenue. The driver was quickly taken into custody.

Merriam Police and the Kansas Highway Patrol assisted officers from Overland Park and Kansas City, Kansas, with the arrest.

Recorded radio traffic states that officers found the one-and-a-half-year-old boy asleep and secured in a rear-facing car seat. He was not injured and was picked up from the scene by his family.

At the scene of the car stop, Sergeant George Naylor said the man would likely be facing a slew of charges.

“There’s potentially impaired driving, but we haven’t confirmed that yet,” Naylor said.

Kansas City, Kansas Fire and EMS responded to check on the suspect and child. No officers reported injuries.