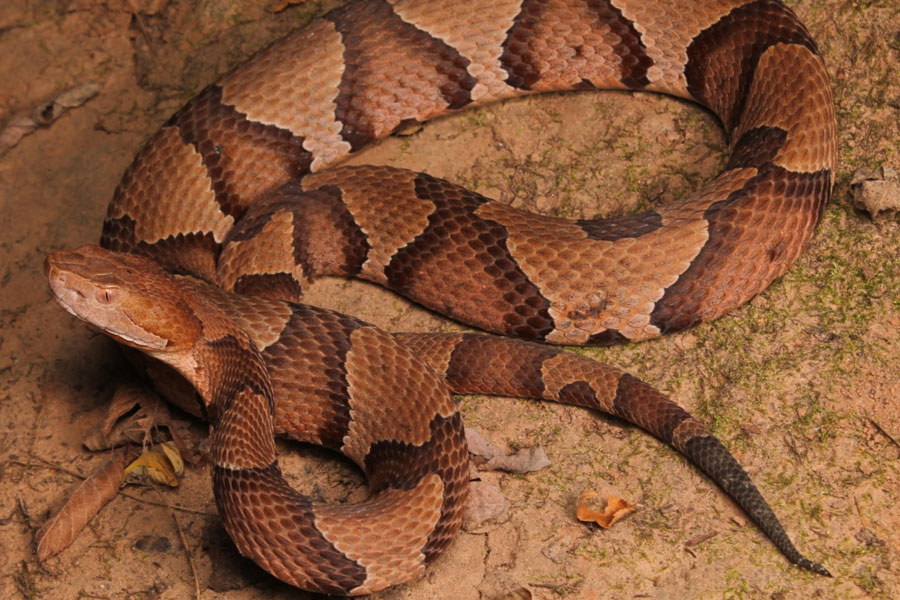 Copperhead sightings have been reported in nearby Douglas County. Local parks officials say the warmer summer months are when snakes are more active and likely to be encountered outdoors. Photo via Lawrence Parks and Recreation Facebook page.

As the weather continues to warm up across the region, areas around Johnson County are reporting an uptick in snake sightings — including some venomous species — and local parks officials here are giving tips for what walkers and hikers should do if they encounter these slithering creatures.

Copperhead sightings: It hasn’t happened in Johnson County so far, but parts of eastern Kansas are reporting sightings of copperheads, which are poisonous.

It’s seasonal: Snakes are active during the warmer months between late March and November, according to the Kansas Department of Wildlife and Parks.

Venomous snakes: Of the 42 species of snakes native to Kansas, there are only four that are venomous, KDWP says.

Safety tips: Garrett said the best the best thing you can do during snake season is be “snake aware,” which means:

If bitten: If you think you have been bitten by a venomous snake, KDWP says the it is best to stay as calm as possible to slow the spread of the venom.

Key quote: “[Snakes] are an integral part of the ecosystems in our large regional parks,” Garret said. “We educate park users with flyers at trailheads and kiosks that they might interact with venomous snakes.”