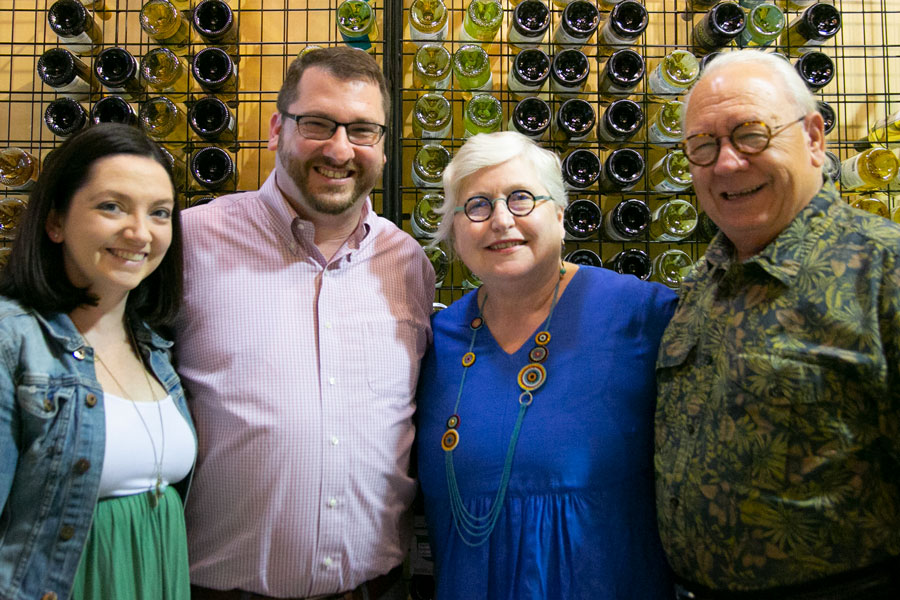 Rimann Liquors of Prairie Village is under new ownership. Above from left to right, new owners Sarah and Paul Ott, next to Mary and Marshall Rimann, who founded the business in Prairie Village in 1999. Photo credit Juliana Garcia.

Rimann Liquors of Prairie Village, a popular establishment that has been in business in the Prairie Village Shops for more than two decades, is now under new ownership.

The couple says they wanted to ensure the store’s future while they were still healthy and of good mind — and keeping ownership within the Rimann Liquors family remained of utmost importance, they said.

The new owner: That’s how they chose as their successor Paul Otto, who has been a Rimann employee for more than 16 years.

Otto is a Shawnee Mission East alumnus and Prairie Village native who now lives nearby in Overland Park.

He and his wife Sarah took over the day-to-day operations at Rimann Liquors in early March.

Previously, Otto worked on the wholesale side of the business. This includes working with country clubs, restaurants and bars.

Otto said he is dedicated to continuing the liquor store’s reputation in the community, including its quality of customer service, knowledge and support Rimann Liquors is known for.

Key quote: “We’ve been here for a long time and we want to continue in their legacy, the customer service, we’re always here,” Otto said.

Bigger picture: This isn’t the first time the Rimanns have passed off ownership of one of their stores to a trusted employee.

They sold their original Lenexa location to an employee there last April.

Despite the ownership change, Mary says she will still work at the Prairie Village location as a part-time employee.

Rimann history: The Rimanns started their business in Lenexa in 1983 and expanded to Prairie Village 16 years later.

Marshall and Mary originally purchased the former Bryant Liquors at the Shops of Prairie Village in 1999.

Before it was Bryant Liquors, Marshall said, it was New York Yankee Hank Bauer’s liquor store.

Originally, the Prairie Village location was the size of the current store’s party shop area, Marshall said. The Rimanns opened an expanded store in December 2000, he said.

Key quote: “There’s a lot of places where you can buy wine and beer, spirits, just about every corner now,” Marshall said. “I think what has set us apart from everyone else — both in Lenexa and Prairie Village — is that not only are we selling those products, but we are providing a little environment that we hope everyone is going to enjoy whether they’re in here once for five minutes or if they’re in here on a regular, periodic basis.”